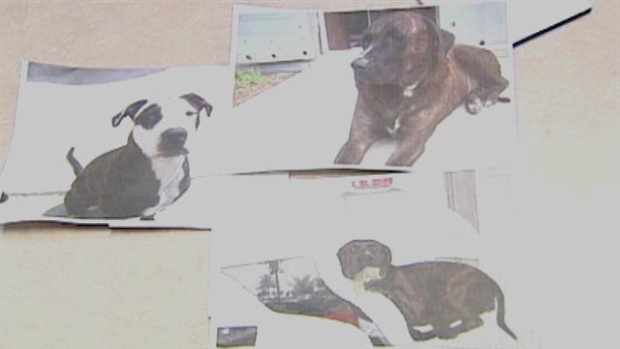 The front yard of Cathy Thomas’ home became a graveyard for her three dogs on Tuesday August 14, 2012 in Loxahatchee, Florida.

Thomas said two Palm Beach County Sheriff’s Office deputies shot and killed her two great Danes and one pit bull. She said the deputies were there serving papers to her friend and when they stepped on the property, her dogs ran forward to greet him.

“They always do that,” Thomas said. “They’re dogs.”

“And the dogs ran back to greet him or whatever, but I do not believe for one minute that that man was in any kind of danger,” Thomas said.

The three dogs died on her driveway. They were put into black plastic bags and then buried in homemade coffins.

Thomas stated that her dogs have never been in trouble with Animal Care and Control and have never tried to bite anyone.

“It’s become to the point, in my opinion, that the citizens and their animals are nothing but target practice,” she said.

A sheriff’s spokeswoman said the deputies feared for their lives after the dogs charged them, leaving them no choice but to protect themselves, although they could have just as easily chosen to leave the private property they were entering uninvited.

“That’s a little ridiculous for them to go to that extreme and to come on my yard, where I have nothing to do with the situation, and kill three of my dogs,” Thomas said. “That’s where I have a problem.”

Thanks to “rjallen70@gmail.com” for bringing this story to our attention.