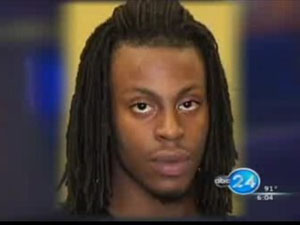 Chavis Carter was a passenger in a pickup truck that was stopped by police in Jonesboro, Arkansas Saturday July 28, 2012. An officer reportedly found some marijuana, and ran Carter’s information. He was wanted on a warrant out of Mississippi, so officers placed him in a patrol car.

Police video recorded the night Chavis Carter was fatally shot in a northeast Arkansas patrol car while his hands were cuffed and double locked behind his back hasn’t resolved questions about whether he shot himself in the head as officers said. Police have said officers had frisked Carter twice without finding a gun. Also, he allegedly called his girlfriend at some point during the arrest and said that he would call her soon from jail.

Jonesboro police released footage to The Associated Press and other news organizations under a Freedom of Information Act request this week. They released more footage Friday amid questions about why the first batch of video appeared to end before the officers found Chavis Carter, 21, slumped over and bleeding in the back of a patrol car on July 28 as described in a police report.

The second batch of video occurred after Carter was discovered, police said.

“There’s still nothing in there about what actually happened with Chavis,” Benjamin Irwin, a Memphis-based lawyer representing Carter’s family, said Friday before the second batch of video had been released.

The internal police investigation into the shooting has not yet been completed and the FBI has said it is also monitoring the case.

Sgt. Lyle Waterworth, spokesman for the Jonesboro police, said Friday morning that he hadn’t yet seen the video his department released the night before. Hours later, amid questions about the dashboard camera video, he agreed to release more footage that he said occurred after Carter was discovered.

No other dashboard camera video exists, he said, but additional video was retrieved during a forensic exam of Carter’s phone. He said that remains part of the active investigation and wouldn’t be released yet.

To explain stops in the video, he said the camera system in both patrol cars is controlled automatically with an emergency light bar and siren system.

“After the light bar is turned off the camera system ends its recording,” Waterworth said in a statement. He didn’t respond to email and phone messages seeking further comment.

The second batch of video begins as what looks like light from a police car flickers on a stretch of road. A dog barks and a white SUV turns around a little ways down the street.

An unseen man curses shortly after he says, “He was breathing a second ago.” An ambulance pulls up and someone, perhaps the same man, says, “I patted him down. I don’t know where he had it hidden.”

Later, someone instructs the others to leave everything as it is.

The video goes on to show an officer cordoning off the area with police tape. Two people can be seen looking on, but they leave after interacting briefly with an officer.

Carter is not shown in that video.

The first batch of video begins when an officer pulls up to a white pickup truck on a dark street in Jonesboro, about 130 miles northeast of Little Rock. He talks to the driver, Carter and another passenger. Police say the officer stopped the truck after someone reported a suspicious vehicle driving up and down the road.

Another officer arrives and searches Carter, who police say initially gave a different name. The officer doesn’t appear to find a gun as he pats Carter down, though something else falls to the ground as the officer shines a flashlight toward Carter.

The officer leads Carter, who is not yet handcuffed, toward the patrol cars and then out of the frame. A police report said Carter was placed in the second patrol car without handcuffs, though the video doesn’t show that.

Meanwhile, the other officer searches the driver and remaining passenger, who then stand in front of the first patrol car. The officer who searched Carter asked them where the rest of the marijuana was because he found some on Carter.

The driver and other passenger are handcuffed and led out of the frame, too.

Eventually, they appear without handcuffs and the officers let them leave.

They keep Carter, who had an arrest warrant out of Mississippi. Court records show it had to do with a drug-related case.

The video ends after the truck drives away and the officers talk about leaving.

“See ya later,” one of the officers says. It sounds like he opens the car door and then the audio cuts out. The police car’s blue lights continue to flash for several seconds, lighting a nearby bush.

Carter was shot in the head, though police have refused to give more specifics.

Police said in a statement that they’re still waiting on a complete autopsy report, forensics and toxicology results from the state crime lab.