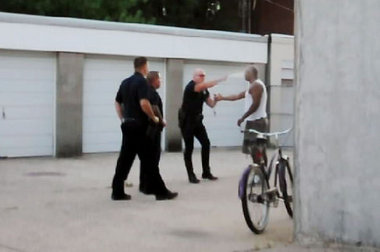 According to The Jersey Journal:

A Bayonne, New Jersey man who called 911 because his car was on fire charges in a lawsuit that he was pepper-sprayed, knocked out cold, and arrested by police for no reason.

And Jason Rios says he has the videotape to prove it.

But a police report states that Rios acted in a “threatening manner” and justifies the force officers used.

Rios’ car was parked behind his 33rd Street apartment building on Aug. 29, 2010, when it caught fire.

The video provided to shows a verbal exchange between Rios and police officers after the flames had been extinguished. It shows Rios walking away from the cops when an officer follows him and appears to spray him in the back of the head with what the lawsuit says was pepper spray.

The video then shows the 35-year-old turning and pointing at the officer, and the officer grabbing Rios’ wrist and spraying him in the face.

Two other officers help bring Rios to the ground and handcuff him with no visible sign of resistance.

As Rios is being walked to the radio car, an officer turns to the person shooting the video and says, “Go inside with that camera,” but the person continues to record the scene.

The video then shows Rios being frisked at the open door of a police car. At one point, he turns, says something to the officers, and is yanked by the arm and placed on the pavement, out of view of the camera.

The tape, which is six minutes long, goes on for four minutes more and Rios cannot be seen getting up.

While Rios is on the ground, the man taping the video says, “They’re hitting him right now. Look, they are jumping him . . . Look they’re kicking him in the face.” Attempts to contact the person who recorded the incident were unsuccessful.

In the lawsuit, Rios’ lawyer, Joel Silberman of Jersey City, alleges Rios’ face struck the pavement and the officers “savagely assaulted him until he lost consciousness.” The suit says police took “efforts to shield the scene of their beating and the resultant unconscious plaintiff.”

Popowski was named in at least three separate complaints between 2006 and 2009, lawyers representing plaintiffs in a previous incident said. Information on previous complaints was not available through the Bayonne Law Department.

The lawsuit asks for punitive damages and lawyers’ fees, but does not specify an amount.

Bayonne spokesman Joseph Ryan said it is city policy not to comment on ongoing litigation. The officers could not be contacted through the Police Department and there was no answer at the Bayonne PBA.

A Bayonne police report tells a much different story than the lawsuit.

According to the report, Rios “continued to tamper with the interior of the vehicle” after he was told to back off due to an arson investigation into the fire.

The report says Rios refused to calm down, cursed at the officers and when told to comply, said: “I don’t have to do nothing. That’s my f ing car.”

The report says that when Rios advanced on a firefighter in a threatening manner, an officer grabbed his wrist to stop him and pepper-sprayed his “face area.”

It says Rios “physically resisted being placed into the police vehicle and was spitting bodily fluids in all directions” so he was placed face-down in the street. After the incident, Rios was taken to the Bayonne Medical Center “as a medical precaution” and he was cleared for incarceration, a police report says.

The Hudson County Prosecutor’s Office determined that criminal charges against the Rios could not be sustained and the downgraded charges were sent to Bayonne Municipal Court, where Rios is scheduled to appear today.