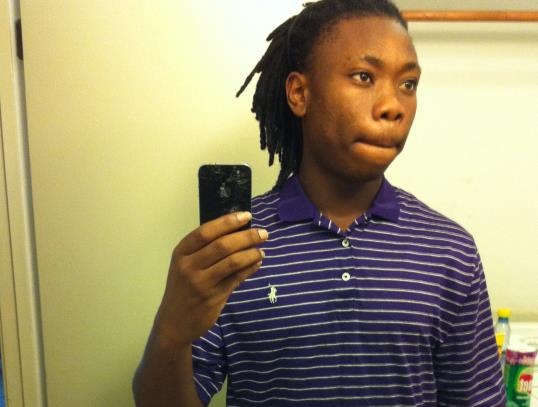 Louisiana – State Sponsored Criminal ‘Deputy’ William Phebus, who has been employed at the Tangipahoa Parish Sheriff’s Department for three years, is on paid leave as State Police investigate the recent fatal shooting of Cjavar (Dee-Jay) Galmon, an 18 year old.

August 11, 2012, Galmon was at Club 81 in Tangipahoa Parish with two of his friends. Well into the night, the club’s security called Tangipahoa deputies for help following a large disturbance. Two deputies arrived at the scene. They were in the process of handcuffing an allegedly armed man on the ground when Galmon came into the picture.

Sheriff Daniel Edwards confirmed that Dee-Jay was unarmed, then went into further comment. “We have no reason at this time to believe that this 18-year-old did anything wrong and certainly, I want to make that clear. He was unarmed. I’m not saying he violated any laws what so ever,” said Sheriff Edwards.

The lawsuit also alleges the Tangipahoa Sheriff’s Office was negligent and did not properly investigate William Phebus’ past jobs before hiring him. The suit goes on to say Phebus’ history should have been an area of concern.

The earliest mention found for his law enforcement career, by the “I-Team,” was January 1998 at the Plaquemines Parish Sheriff’s Office in Belle Chasse, LA. While employed in Belle Chasse, two separate lawsuits were filed against Phebus and others for excessive force. Among the complaints was physical assault to inmates. In one incident, a suit reads, “Everyone was ordered to strip naked and stand. Inmates were lined up and told that whichever of them moved would be beaten and then individuals were sprayed in the face with mace and tear gas.” In the second suit, Phebus is accused of hitting an inmate. Both suits were settled in 2000 around which time Phebus resigned from the Plaquemines Parish Sheriff’s Office

He was then hired at the Elaine Hunt Correctional Facility just outside of St. Gabriel, where he was employed less than six months.

February 2001, Phebus joined the St. Gabriel Police Department where he was put through a police academy. He only lasted six months. Kevin Ambeau is now the police chief in St. Gabriel and said he remembers Phebus.

“Chief Nelson was the police chief at that time, and he recommended the city council terminate his employment because of numerous complaints against him,” said Chief Ambeau. The complaints included verbal and written warning notices regarding his unauthorized absence, failure to follow the law and leaving well before his shift was over. The minutes from that August 2001 council meeting showed the chief and council members frustrated with all the complaints against the officer. It only got worse when it came to then-St. Gabriel Mayor George Grace. “Mayor Grace stated in the minutes that Officer Phebus had more complaints on him than the entire department put together,” said Chief Ambeau. It’s why the council voted to terminate Phebus.

He then went to Sorrento Police in 2002 as a part-time officer and became full-time just five months later. When his 90-day probationary period was over, the mayor and council there voted not to hire him. Phebus went back to Elaine Hunt Correctional Facility in 2004, this time for about 15 months.

In 2009, he joined the Tangipahoa Parish Sheriff’s Office where he is now on paid leave for shooting and killing an unarmed teen.

The I-Team put in a call to Tangipahoa Parish Sheriff Daniel Edwards. His spokesperson told 9 News he could not comment because this is an ongoing case.

Meanwhile, State Police is finalizing their investigation and is expected to release its results to the district attorney next week.

Sources say that Sheriff Daniel Edwards wants the case to go in front of a grand jury, but has since said that the fatal shooting by Phebus’ was accidental.

Deputy William Phebus’ history of excessive force makes it clear that he is dangerous, irresponsible, and aggressive – at least when put in positions of purported authority. If William were to act in such a manner in any business other than law enforcement, he would be fired, exposed to the community and other potential employers in the field, and face other consequences almost immediately. Because Phebus’ misdeeds are committed under the guise of ‘authority,’ they are misrepresented as legitimate. While it is true that an internal investigation is being conducted regarding whether William Phebus’ act of murder was “justified,” regardless of the outcome, his actions have already been legitimized by the individuals referring to themselves as the government. After William Phebus’ unwarranted killing of an 18 year old boy, he is on paid leave, or vacation, and you are paying for it.

If the investigation finds that Deputy William Phebus was in the wrong, what do you think will happen?

Suspension? Possible. Termination of employment? Maybe. Will he be charged with murder, go to jail, or face any other serious consequences for his actions as he would if he had not been wearing a shiny piece of metal on his chest when the murder occurred? I highly doubt it. Will there be justice for Dee-Jay Galmon and those that loved him? Impossible. An innocent young man lost his life, those who love him continue to suffer, and the man with a history of aggression who unjustly took his life is on paid vacation, courtesy of the tax-payer. That doesn’t sound like justice to me.