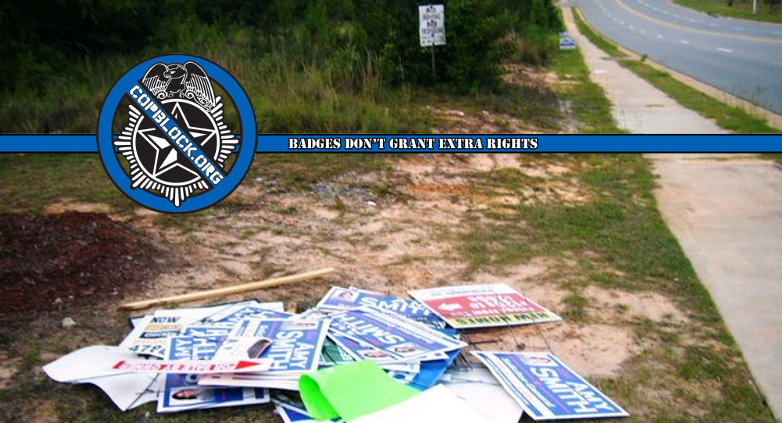 The following post was shared with the CopBlock Network by Joseph Howard, via the CopBlock.org Submissions Page. It details an incident in which he states that he was subjected to a false arrest by the husband of a candidate for local office in Houston County, Georgia, who is also a Lieutenant at the Warner Robins Police Department.

I live in Georgia. We have laws in this state against posting signs on the rights-of-way (ROW). The Georgia Department of Transportation issues news releases yearly warning politicians not to post signs on the ROW. These same laws state that anyone who violates these laws shall be punished the same as littering.

Imagine my surprise when I was arrested July 1, 2012 while out on my weekly routine picking up illegal signs. My actions were not politically motivated. I was going out weekly, with the blessing of the Georgia Department of Transportation, picking up signs along the roadways. You’ve seen the various signs: Pressure washing, roofing, mattresses, house foreclosures, we restore bad credit, etc. Consider the fact that election season had just started too and you’ll see I really had my hands full.

You would think politicians would know the law – especially someone running for Solicitor General of Houston County, such as Amy Smith. She did not want me picking up her illegal signs. Amy’s husband, Lt. Brian Smith, is a lieutenant at the Warner Robins Police Department. He is the one who declared that his wife, solicitor Amy Smith, wanted to press charges for 23 counts of theft by taking.

I have pictures of the signs I picked up that clearly show them on the right-of-way. Officer Jerry Neese of the Warner Robins Police Department, the officer who noticed me picking up signs, wrote on my arrest report that the signs were on the ROW. Still, I could not convince them of my good intentions or that the signs ARE litter. I was arrested, booked, handcuffed, and transported in the back of a police van to the county jail until I could post bail.

Bail was set at $5000, for what amounted to $92 worth of signs. I had to pay $500 bond to be released. The name of the judge that signed the arrest warrant that Sunday afternoon was Angela Sammons, the magistrate. My trial date in state court is set for September. 6, 2012. At this point, I have refused to pay another $1500 (cheapest I’ve found) for a defense lawyer.

Note: A follow-up with Joseph revealed that on August 28, 2012 “[he] got home from work and found a letter from the Houston County DA stating that the case has been dismissed ‘at the request of the victim.'”

“I was surprised that I didn’t feel any less angry that it happened in the first place. I would have liked to have gone forward in court to get a judgement as to whether I have a right to clean up litter or not. I guess I will just have to get arrested again. I AM THE VICTIM! They put me through hell. I have never been convicted of even a misdemeanor before.”