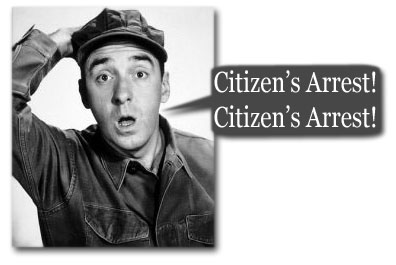 This article below was written by Sean Haeussinger, II -of The “Rights We Already Have” Movement
The text below is an updated version from that originally posted on September 3rd, 2012.

I got arrested for essentially defending the rights of another person. The resulting arrest has me defending my own rights so hard, I am nearly going on the offensive — but I’m doing my best to save it for the Title 42 (United States Code) charges I intend to press against the San Diego Sheriff Department.
I witnessed an officer (Deputy D. Drake, badge #7710) pull someone over for a traffic stop, primarily regarding a stop sign violation, the legality of which is debatable (at the very least, in this particular incident, if nothing else), and the offending officer proceeded to go beyond his investigation by shining a flashlight through the victim’s car without a Warrant, and with questionable probable cause. He asked the victim to step out of the vehicle, for no reason ascertained; and then he searched the victim’s person with neither a Warrant nor his consent. (Note: if the victim did consent, the offending officer failed to prove it in a satisfactory manner.)

The offending officer was trying to leave the scene of the crime as I was about to detain him and question him about his actions. His continued attempt to leave the scene of the crime prompted me to affect a Citizens’ Arrest on him. It turns out even California (California Penal Code, Section 837) allows a person to arrest a law enforcement officer under affirmation that s/he broke the law, as is the case with me. Since I was arresting a law enforcement officer, a supervisor was sent for me to report to. As I was giving my report to the supervisor, they ganged up on me for no reason I could ascertain, at the time. They used more force in their attempt to arrest me than was necessary to restrain me; and as a fundament of United States law, it is and was my right to resist unlawful arrest. I used too little force in my resistance to warrant the use of a tazer, as I was practicing Aikido — though it had been modified by my effective failure to keep enough calm for the situation. Suffice it to say that, of the two charges against me, I was charged with what they had done to me: battery.

Actually, more like assault & battery; not just because of the police brutality, but because their arrest was illegal, and unlawful (“An illegal arrest is an assault and battery. The person so attempted to be restrained of his liberty has the same right to use force in defending himself as he would in repelling any other assault and battery.” State v. Robinson, 145 ME. 77, 72 ATL. 260). They had acted in violation of Title 18 U.S.C. Section 241 (Conspiracy Against Rights) & Section 242 (Deprivation Of Rights Under Color Of Law), as well as California Penal Code, Sections 422.6 (http://codes.lp.findlaw.com/cacode/PEN/3/1/11.6/2/s422.6) and 422.7 (http://codes.lp.findlaw.com/cacode/PEN/3/1/11.6/2/s422.7); and other violations too specific for this article.

After I was sent to the station, as they were trying to book me, the offending officer (who acted illegally during the traffic stop) surprised me with an informal drug test, one that could not be held against me in a court of law; even if I didn’t exercise the Fifth Amendment, which I did, while I was talking. He tested me without my consent, and it was clear to me that he was trying to find more crimes to charge me with. After I refused to answer one way or another about his allegation that I was on drugs (I was not; but there was no way I was going to tell that to him, for legal reasons), he sent me to the hospital under a 5150 Mental Health Hold for 72 hours. I could tell you how the hospital cooperated with the offending officer in the issuance of the 5150, but that is irrelevant, for now. Actually, I should throw in the fact that they wanted to work with me, but they insisted on doing it wrong; so I ended up staying 66 of the 72 hours I was not supposed to be there, when I could have – and should have – gotten out sooner. The facts of the case show that this was actual kidnapping.

My court date is October 10, and I want as many people to know about my active defense & exercise of my rights — in court, and out. I expect to either have the case against me thrown out or the Jury to rule in my favor; and in the event of this, I intend to press charges against the San Diego Sheriff Department, afterward. As a part of such action, in pursuance of Title 42 U.S.C. Section 1983 et seq., I am making them pay my medical bills, because I was placed in the hospital against my will, and for illegal reasons.

*To make the lawsuit possible, I am raising funds to pay for the legal fees for my defense against the illegal (unlawful) charges against me, and for the legal fees to press my charges against the actual “plaintiff”; not “the people,” who I represented as I exercised my right to come to the aid of another person.
I promise that the reward of your collective contributions will be such a justice that illuminates the true legal framework of our nation — and therefore, freedom. I thank you all in advance.