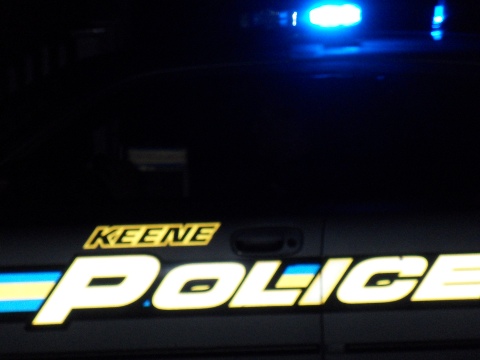 Friday August 31, 2012, I went out to a Keene CopBlock event with about 12 other individuals. The purpose of the event was to patrol the streets of Keene and hold accountable public officials in the course of their duties by way of documentation. The vehicle I was in was notified, via two-way radio, that an interaction with police was occurring at Cumberland Farms. As we pulled into the parking lot, we saw two Keene Police cruisers stopped behind a female driver’s vehicle, lights flashing and blocking another entryway into the parking lot. We approached the scene and many activists filmed the interactions. Officer Jason Short and another unknown officer approached the vehicle, asked for identification, then asked the driver to step out of the car. It was made evident at that point that the reason for the stop was that the officers believed the woman’s vehicle sat too close to the ground. Officer Jason Short knelt down with a measuring tape and measured the distance between the ground and the bottom of the vehicle. He noted that the vehicle was two inches closer to the ground than regulations allow. Officer Short gave the woman a warning, then both officers proceeded to exit the parking lot.

After the officers left, one activist asked the woman for an interview, which she happily participated in. Apparently she has been ticketed by Keene Police in the past for the same “offense.” Luckily, they did not try to extort money out of the woman during this unnecessary interaction, but is this really the best use of your tax dollars? I know that I would not voluntarily pay for people to be heckled about the distance between their vehicle and the ground. As the actions of the woman involved, or the height of her vehicle rather, does not cause harm to any other individual, it is really not my business, your business, or the police officers’ business whether her car rises 15″ from the pavement or 17″ from the pavement.