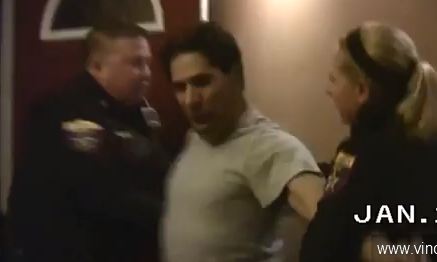 As you can see in this video, a man was tased in his own home after denying officers access without a warrant handy. One of the officers at the door notified Vince that they were there about an arrest warrant and then told him, “Either you or your son are going to jail right now.” When Vince asked why he would go to jail, the officer responded that he was obstructing. Vince denied that and asked to see a warrant. The officer told him it was in the computer, and that he could not actually see it because they did not bring a physical copy. The officer repeated that either Vince or his son was going to jail and asked who he wanted it to be. Vince told the officer that he was going to close the door, to which Vince responded, “No, you’re not.”

“Are you telling me that I can’t close my door?” Vince inquired to which the officer said, “That’s what I’m telling you.” He stated that if there was an active warrant for Vince’s son and they knew he was there, then they have the right to “make force into your residence.” Vince told the officer that he was going to get his phone and call his lawyer, at which point the officer said, “Fine” and stepped inside the home.

Vince put his hand out in front of him, as if to block the officer from proceeding further into the home, and said, “Step outside of my house!” The officer walked into the hand, said, “Now you touched me, now you’re going to jail,” grabs onto Vince, at which point a female government-funded attacker also jumped on Vince, and changes his claim from “touched” to “pushed.” “I pushed you? Are you kidding?” Vince exclaimed as the female officer started screaming at him to get on the ground and pulled him out of camera range. Seconds later, another occupant of the home picked up the camcorder in time to capture the female officer tase Vince in the back, and Vince fall to the ground and start bleeding.

After videotaping the police taser him in his own home, the Lake County, Illinois man is prevented from testifying in his own defense for fear of being prosecuted under the Illinois Wiretapping Law. Using the actual video of the incident and legal transcripts, Vince and Kitty Testa show how the police machinated charges against their family. The following (75 minute) documentary exposes the truth and the background of the case, explores the relationships among Lake County law enforcement and the Courts, examines the growing use of tasers, challenges the concept of Contempt of Cop, and exposes the Civil Rights implications of the Illinois Wiretapping Law.

The documentary also documents numerous other beatings, tasings and deaths as the result of police contact.

Thanks for bringing this story to our attention, Nick!