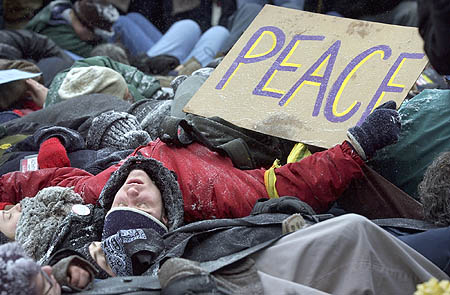 Police brutality is in the news, thanks to the widespread availability of amateur video and the omnipresence of security cameras.

We’ve seen scene after scene of police beating the crap out of, and even shooting and killing unarmed or minimally dangrous students, women, old men and crazy people, many of them after they have been handcuffed and checked for weapons.

The police brass, and leading politicians who oversee the departments involved, nearly always have the same answer: This is not the norm, these are isolated incidents, police violence is not on the rise. Rarely is an abusive or murderous officer punished or even administratively disciplined for documented crimes.

The thing is, of course, it is on the rise. Just as the exonerations of supposed murders and rapists are only those where there was DNA available to prove their innocence, while many more are also clearly wrongly facing death or long prison sentences, the scenes of brutality we’re seeing on the videos are just the tip of the proverbial iceberg too. What is different is that we’re seeing these things at all. It used to be that getting videos of police brutality was very rare — like the taping of the notorious police assault on the prone body of Rodney King by Los Angeles cops during a traffic stop. It just happened that someone with a video camera was at the scene when it occurred. Nowadays everyone with a cellphone is a potential videographer, so we’re seeing more of what really goes on when police make their arrests.

Just check out the latest video of LAPD officers body slamming a 5’4″ nurse (two times!) who had the audacity to get out of her car when they stopped her for talking on her cell phone while driving (this particular video was taken by a surveillance camera at a store focussed on the parking lot where police had followed the woman’s car). Note that one of the burly cops slamming this small handcuffed woman to the ground and later fist-bumping to celebrate with his younger partner holds the rank of commander — he’s a 20-year veteran of the LAPD.

Or check out this video of four LAPD cops on top of a 19-year-old (black) student stopped for skateboarding on the wrong side of the street. After he was down and handcuffed he was punched in the face by a cop, breaking his nose and cheekbone. This for a very minor offense, not even warranting an arrest, but just a citation.

But it’s not just Los Angeles. We also have videos like this one of a young woman stopped by a Pennsacola, Florida cop. In this case the cop was fired and jailed after his supervisor viewed the video, taken by the camera on the cop’s own car. This case was unusual. The woman filed no complaint about the abuse, probably figuring it would be pointless. But in a standard review of the officer’s video footage, the incident was spotted and referred up the chain to the department chief, Chim Simmons, who was outraged at the treatment of a handcuffed woman.

Much worse was the killing, by six Saginaw, Michigan cops, of a troubled homeless man who had called 9-11 after an argument with a shop attendant. Standing far from the cops, and holding a small knife, he was shot, apparently, judging from the video, as he was walking away from the officers, who hit him with a volley of 46 shots, killing him. This video was taken by someone in the parking lot who had a cell phone. Two months later, the local DA is still allegedly claiming to still be “investigating” that tragic incident.

The thing we need to all recognize is that these videos are just the incidents that have been captured on video. They clearly reflect something that is going on all the time, usually without any video to record it, or often even without any eye witnesses.

Police in too many departments are out of control. Too many departments are allowing their uniformed and armed cops to act as though they are an occupying army. Many of the younger cops may even have come from military duty in Iraq and Afghanistan where they actually were acting as an occupying army since in many jurisdictions there is a preference given to hiring such veterans. That would be fine if those veterans were put through training programs to make clear to them that there is a fundamental difference between war and policing, and that the public here at home is not the enemy, but I sincerely doubt that that is being done in most police departments. Indeed, given the mindless hanging of the appellation “hero” on everyone who wears or once wore a military uniform in our current war-obsessed culture, veterans who become cops are probably seen as ideal for the job.

The attitude of being occupiers and in a state of war with the people being “policed” is enhanced by politicians who call for tough policing, and by the Pentagon, which is handing out military equipment to police like candy to trick-or-treaters. Police are routinely armed with M-16s in their squad cars. We all saw the result of this kind of militarization of the police in the ease with which police in cities across the country, from New York to Chicago to Los Angeles to Portland and points in between became paramilitary goons in attacking peaceful Occupy Movement protesters with everything from tear gas cannisters and rubber bullets to mace or pepper spray aimed point blank into faces.