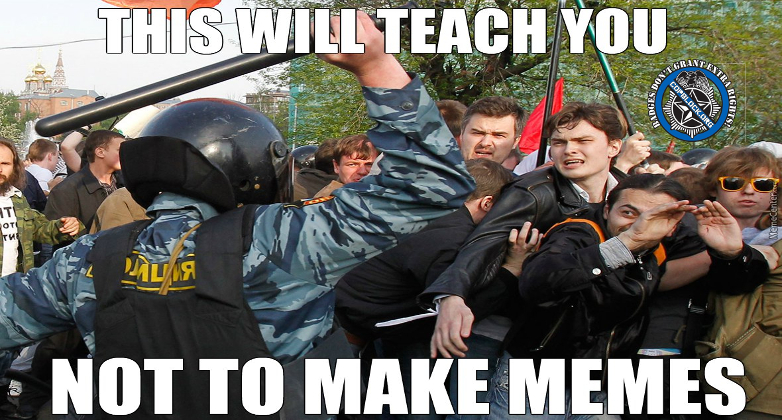 Cop Block has touched upon the fundamental unfairness of “Resisting Arrest” charges in the past, but it is a problem that warrants continued vigilance.

There will always be goons who justify all kinds of abuse and violence by police under the mantra of “the law is the law!” but most reasonable people (those who aren’t fascists, communists or police-state lovers) are at least somewhat disturbed that an individual can be arrested and jailed for committing no crime, except that of refusing to submit to illegitimate arrest.

While people erroneously believe that “Resisting Arrest” applies only when an officer is apprehending a criminal, this simply is not the case. Resisting arrest charges essentially are a blank check to police to arrest anyone they please; a crime need not have been committed in order for police to undertake arrest. For example, New Jersey’s statute provides as follows:

(1) Except as provided in paragraph (3), a  person is guilty of a disorderly persons offense if he purposely prevents or attempts to prevent a law enforcement officer from effecting an arrest.

(2) Except as provided in paragraph (3), a person is guilty of a crime of the fourth degree if he, by flight, purposely prevents or attempts to prevent a law enforcement officer from effecting an arrest.

(3) An offense under paragraph (1) or (2) of subsection a. is a crime of the third degree if the person:

Uses or threatens to use physical force or violence against the law enforcement officer or another; or

Uses any other means to create a substantial risk of causing physical injury to the public servant or another.

Innocent until proven guilty has not existed in this country in a long, long time. Almost all the states have such laws, with the exception of a handful – Alabama, Georgia, Louisiana, Maryland, Mississippi, North Carolina, Oklahoma, South Carolina, Tennessee, West Virginia, and Wyoming. Even these states are slowly whittling away at the liberties that remain. The police can arrest an individual for any reason, or no reason at all, and it is up to the individual to resolve the charges against them. “Innocent until proven guilty” is a shameless sham perpetuated by law enforcement, believed only by the blind and the foolish.

The reason such laws have repeatedly been upheld by courts is because people in government (judges) believe the police are of a higher order of human beings than everyone else, or because judges are stupid. The explanation is probably the former, as people in the American government frequently and undeniably behave like cronies, aristocrats, and other other members of higher eschelons in a caste system. Judges decided to give themselves absolute civil immunity from damages regardless of what kind of terrible behavior they engage in. Their prosecutor friends also have absolute immunity for a wide variety of abuses they may commit. So while the rest of the peons in America are held accountable or punished for their negligent, reckless or malicious actions, this simply is not the case if you are a privileged member of the elite class of government cronies. They are exempt from morality.

I do not call them cronies or idiots out of mere malice or vitriol. I say this because after examining the case law, the judges would truly have to be dim-witted to actually believe what they say. The only plausible explanation is they granted such broad powers to police simply because they wanted to – and their reasons are just empty drivel they (offensively) hoped the public would be docile enough to accept.

In one case establishing the Resisting Arrest charge, State of New Jersey v. Koonce, the New Jersey Court cited to the esteemed American Law Institute in justifying such a charge, “[T]here ought not be a privilege to employ force against a public officer… It should be possible to provide adequate remedies against illegal arrest, without permitting the arrested person to resort to force — a course of action highly likely to result in greater injury to himself than the detention” [State of New Jersey v. Koonce (1965) 214 A. 2d 428]. The reasoning here is that if an innocent person resists a wrongful police officer, the police officer will likely injure him in a manner much more severe than detention. As such, the innocent person should simply be forced to submit to incarceration for his own safety. The lack of logic, and implied support for a police state is truly baffling. Why is it that the court’s solution is not to punish the officer who acts illegally, but to incarcerate the innocent person, allegedly for his own protection? Are we really expected to believe this nonsense?

The scenario of wrongful arrest is simple – there is an innocent victim, and a law-breaking police officer. To say the innocent individual must endure incarceration because the morally and legally unjustified officer might injure him is both irrational and offensive to any idea of human dignity. This would be much like saying that since women who are being raped may be killed if they resist, that the law should forbid them from resisting for their own “protection,” while the rapists should be free to do as they please. The answer is not to forbid women from resisting rape; the answer is to punish the rapists. Similarly with wrongful arrest, the answer is not to force the innocent people to submit to incarceration, the answer is to punish the criminal police officer who acted beyond the scope of the law.

The court also cited to the Uniform Arrest Act’s justifications for Resisting Arrest charges, one of which was as follows – “the fate of today’s arrestee is usually a few hours in a reasonably clean place of detention rather than the probable consequences awaiting the arrestee of yore.” This kind of reasoning would be very similar, and indeed logically identical, to saying that minorities should not be allowed to retaliate against Ku Klux Klan mob beatings, because beatings are not nearly as bad as the killing or lynching the Ku Klux Klan used to do.

Once again, in case these judges had forgotten (or more likely purposely avoided), the issue at hand is that of unlawful arrest. Even if one subscribes to the idea that police are superior human beings, bestowed with perfect judgment and deserving of special rules, the circumstance of unlawful arrest is necessarily one involving a law-breaking police officer initiating aggression upon an innocent person. Only the most authoritarian and absurd people should contend the rights and safety of law-breaking officers should prevail over that of non-police innocent people. In the situation where a law-breaking police officer arrests an innocent individual who resists, and the officer furthers his already atrocious behavior by drawing a gun, the innocent person absolutely should have the right to draw a gun in retaliation. In this type of scenario, it is the officer’s fault at every juncture of the interaction – initiation of wrongful contact, attempting unlawful arrest, and then employing deadly force to coerce wrongful arrest. The court absurdly expects us to believe that police should have the right to proceed in this manner without facing physical retaliation – and that this is for our protection.

The court continues its opinion with some more drivel about how putting innocent people in jail would prevent police officers from shooting them, and such measures would surely further personal liberties (do you think I’m kidding? Go read the decision for yourself).

If you think these laws are merely a harmless loophole that results in relatively minor civil liberties incursions, you are wrong. A few cases documented by William Grigg on Pro Libertate describe horrendous uses of this New Jersey statute by police. Ronnie Holloway was standing on a street corner near a restaurant when a patrol vehicle approached. The video from the restaurant’s cameras shows Mr. Holloway doing nothing more than standing on a street corner. Within seconds of the patrol car’s approach, Officer Joseph Rios sprints from the driver’s seat, and viciously beats Mr. Holloway for no apparent reason. Mr. Holloway did not appear to fight back or resist in any manner to Rios’s violent attack. Rios claimed he took action because Mr. Holloway had “verbally challenged” him, and the victim was subsequently charged with Resisting Arrest, among other bogus charges.

Rios lamely, and disingenuously defended his own actions with the usual “the law is the law!” garbage, stating “I did what I was trained to do under circumstances that existed at that time. I stand by my actions.” (Read: if he was trained to eat fetuses, murder children or boil kittens alive, he would do that too, “under the circumstances.”)

Another horrifying incident involved Keith Briscoe, a man suffering from Schizophrenia, who ended up dead because of this law. According to Pro Libertate, Officer Sean Richards admitted after the incident that Briscoe had not done anything warranting arrest. Richards approached Mr. Briscoe and demanded to know who he was and what he was doing. According to another article, Richards attempted to arrest Briscoe after he refused to leave. Mr. Briscoe was maced several times, and beaten. On top of that, bystanders who weren’t entirely sure of what was going on decided to take the side of police and joined in on the beating. Mr. Briscoe ended up dead because he refused to leave the sidewalk.

It’s possible I gave the New Jersey judges too little credit. If these violent bystanders who joined in beating a man to death simply because the police were doing it are representative of people in New Jersey, I suppose they’d be the same type to buy the court’s poor justifications for granting police broad arrest powers, hook, line and sinker.

It seems New Jersey has had more than its fair share of police corruption lately. For another story on corruption involving a wife-beating NJ cop, read here.