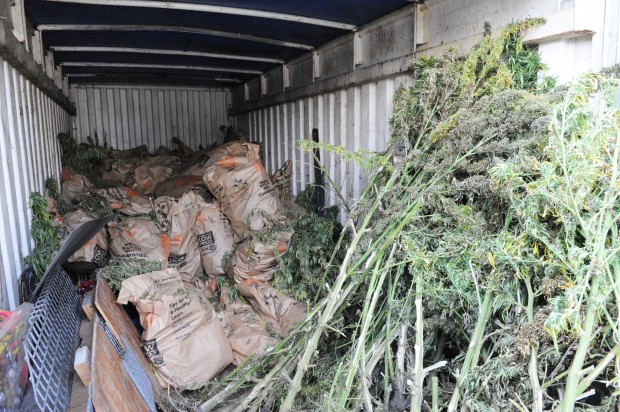 Police “seized” $3 million worth of material, but let’s call it what it is – theft. An enormous theft, amounting to about 2 tons of product, or 3 million Federal Reserve Notes, occurred this past weekend in Lynwood, Indiana. The material stolen was a plant, less harmful than cigarettes. Why do people continue to support these kinds of actions? No human on this earth has a right to control what another possesses or puts in their bodies. If you are not using aggression against another, you ought to be free to live in whatever manner you see fit, regardless of whether others approve.

LYNWOOD | Police said more than 2 tons of marijuana with a street value of about $3 million — one of the largest operations ever uncovered in Lynwood — was seized last weekend.

Police Chief Michael Mears said Tuesday that Lynwood police and Public Works officials spent the weekend dismantling the operation based out of a house in the 2600 block of Glenwood-Dyer Road.

Police received a tip last week and obtained a warrant for the house, where officers discovered some pot plants and assorted packaging materials. Mears said each room of the house “was set up for a different phase in cannabis processing and packaging.”

About 10 pounds of marijuana was recovered from the house, police said.

Officers noticed a water hose attached to the house and running into a nearby field during a search of the property, Mears said.

After following the hose for about a half-mile, police discovered what turned out to be a 2-acre plot of land where nearly 2 tons of cannabis plants were growing in various stages.

“Without their dedication, the village of Lynwood would not have been able to handle an operation of this magnitude,” Mears said, adding he is unaware of any similar operation ever being found within Lynwood or any nearby south suburbs.

The cannabis plants are being held at a secure location and will be kept there until the courts issue a destroy order, likely when the criminal investigation is complete, Mears said.

Police also recovered assorted semiautomatic firearms at the house and coolers used by the people who worked in the fields growing the cannabis plants, Mears said.

As for suspects, Mears refused to name who the house belonged to or who might be facing criminal charges as a result of this cannabis operation.

He would not say whether charges already had been filed or were still being sought. Mears also would not say how many people might be involved with the operation.

“It is multiple suspects,” said Mears, who added police encountered no resistance when they served the warrant Thursday.

“There was nobody at the residence when officers arrived at the scene,” Mears said.