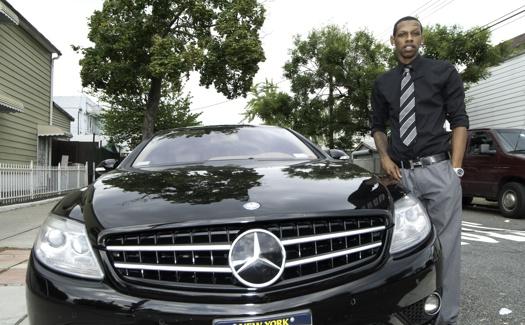 Who could resist such a sweet ride?

While a fraud suspect whose Mercedes convertible was seized by cops rotted in a jail cell, an NYPD employee jumped behind the wheel of the sexy sports car and took it on a wild joy ride around Manhattan.

Rashad Lewis, 25, claims that whoever busted his car out of a police impound lot in Queens added insult to injury by not only racking up a $50 ticket for flying through a red light but also left the $50,000 car a lot worse for wear.

“My back window was broken, my driver’s-side door was keyed, and my bumper was scratched up,” the college student said. “They were driving my car with the windows down and having a ball joy riding my vehicle.” DUDE, THAT’S MY CAR! A Mercedes-Benz owned by Rashad Lewis blows a red light in a traffic-camera shot taken at 2:12 p.m. — when he was jailed and the car was supposedly in NYPD custody.

His story is backed up by NYPD records obtained by The Post that show police vouchered Lewis’ Mercedes-Benz in “good” condition at 1:23 a.m. on Aug. 4.

About 13 hours later, a traffic camera snapped a photo of the car running a red light on 12th Avenue and West 34th Street at 2:12 p.m. — while its owner was still in custody and the car officially in the hands of the NYPD.

Lewis, who lives in Queens, said the saga began the day before, at 2:30 p.m. on Aug. 3, when cops pulled him over in front of Bloomingdale’s.

Lewis and his passenger, his buddy Gregg Humphreys, 22, were hauled off in handcuffs on charges of criminal possession of a forged instrument.

“I was pulled over and arrested and my car was seized,’’ Lewis said.

“I went through the whole process. I was at the precinct for 12 or 13 hours. I went to Manhattan booking.

“I posted bail and was released the next week.’’

That’s when he got the biggest shock.

“While everything is going on, I received the red-light ticket in the mail on Aug. 15,’’ he complained.

“My first reaction was, ‘Are you guys serious?’ I had a whole bunch of emotions running through my mind. I felt violated. I don’t know if they could have committed a crime in my vehicle.”

“How are they supposed to enforce the law when they’re breaking it?” said Lewis, a junior at Berkeley College.

The traffic-light camera photo did not show the face of the driver who pulled off the sophomoric stunt, and it was not known whether the joy rider was a cop or a civilian NYPD employee.

Lewis’ lawyer, Marvyn Kornberg, said that, at the least, his client has no intention of paying the ticket.

“This individual should not be responsible for the payment of the fine, and the Police Department employee driving his car through a red light in a non-emergency situation should be required to pay the summons,” Kornberg said.

But a police source argued that Lewis had no complaints when he retrieved the vehicle from the Springfield Gardens Auto Pound in Queens, where it had been for five days before he posted $3,500 bail for the credit-card rap.

A suspicious Lewis said that after his ordeal, he’s not sure he even wants to keep the car.

“I’m scared to drive around in that car. I don’t know if they put a bug or something in it.”