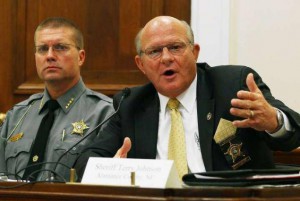 RALEIGH, N.C. – A North Carolina sheriff and his deputies routinely discriminated against Latinos — whom he called “taco eaters” — by making unwarranted arrests with the intent of maximizing deportations, according to a U.S. Department of Justice two-year investigation.

In an 11-page report issued Tuesday, the federal agency said Alamance County Sheriff Terry S. Johnson and his deputies violated the constitutional rights of U.S. citizens and legal residents by illegally targeting, stopping, detaining and arresting Latinos without probable cause.

The agency also said that Johnson obstructed the federal investigation launched in 2010 by withholding requested documents and falsifying records. Federal investigators say members of the department also feared retaliation if they cooperated.

The discriminatory conduct we observed is deeply rooted in a culture that begins with Sheriff Johnson and permeates the entire agency.
– Assistant Attorney General Thomas E. Perez

The report recommends a list of steps to end discrimination by the department, including remedial training, new internal procedures for recognizing and investigating civil rights violations and community outreach. If the county fails to reach a negotiated settlement, the Justice Department could take the county to federal court.

Justice Department officials didn’t immediately respond to a request for comment on whether their probe could result in criminal charges.
A Republican first elected in 2002, Johnson suggested the probe was politically motivated.

“We have never discriminated against Spanish-speaking persons in any way, shape or form,” the sheriff said Tuesday. “The Obama administration has decided to continue to wage war on local law enforcement.”

According to the federal report, Johnson referred to Latinos as “taco eaters” prone to excessive drinking, drug dealing and other unsavory behavior. He ordered special roadblocks in neighborhoods were Latinos live, during which those with brown skin were stopped while whites were waved through.
Johnson also ordered his deputies to arrest motorists who appeared Latino — even for minor traffic infractions — while letting white drivers off with warnings, according to the report. His deputies, in turn, were as much as 10 times more likely to stop Latino drivers than non-Latinos, according the federal review of the department’s traffic stop records. Hispanics make up only 11 percent of the county’s population.

Alamance County lies about an hour’s drive northwest of Raleigh and has around 150,000 residents, according to U.S. Census figures.
“If you stop a Mexican, don’t write a citation, arrest him,” the sheriff is quoted as telling supervisors within his department, according to the report.

In public statements, the sheriff credited his crackdown with decreasing the population of Latinos.

“Their values are a lot different — their morals — than what we have here,” Johnson was quoted as saying in a 2007 newspaper article cited in the federal report. “In Mexico, there’s nothing wrong with having sex with a 12- or 13-year-old girl.”

A spokesman for the sheriff, Randy Jones, denied the sheriff had ever used the term “taco eaters.”  He conceded the 2007 quote was accurate, but said it was made in the context of a local prostitution bust involving underage girls.

Johnson has been a vocal proponent of the federal 287(g) program initiated during the administration of President George W. Bush that allowed local law enforcement officials to check the immigration status of those placed under arrest. Following widespread complaints of racial profiling, the Department of Homeland Security announced earlier this this year it was discontinuing the program to instead focus on deporting undocumented immigrants arrested for serious crimes.

“The discriminatory conduct we observed is deeply rooted in a culture that begins with Sheriff Johnson and permeates the entire agency,” said Perez, who oversees the agency’s civil rights division. “While Sheriff Johnson often justifies (his department’s) activities by citing his desire to combat illegal immigration, we conclude that anti-Latino bias motivates his selection and enforcement of enforcement priorities.”

Justice officials say Johnson tried to stonewall their probe, ordering his staff to speak with federal investigators only with his department’s lawyer present. The federal agency filed a complaint in U.S. District Court last year seeking to compel interviews without the sheriff’s lawyer present, saying staff members had expressed concern Johnson or others would retaliate against them if they talked. That complaint was dismissed at the government’s request Tuesday as the Justice Department issued its findings, making the issue moot.

Johnson said Tuesday he and his staff had “cooperated fully” with the Justice Department, providing tens of thousands of pages of documents.

“The only thing we have refused to do is to deprive our deputies of their constitutional right to have an attorney present during interrogation by the DOJ,” Johnson said.

A 2012 study by a professor at the University of North Carolina at Chapel Hill suggested racial profiling is a statewide problem. Analyzing data recorded from more than 13 million traffic stops by North Carolina law enforcement officers between 2000 and 2011, the study reported that Latinos are 96 percent more likely than whites to have their vehicles searched during a traffic stop, while blacks are 77 percent more likely to be searched than whites.

The federal investigation found Johnson’s deputies attempted to hide how many Latinos they were stopping and arresting by “vastly under-reporting” under a state law requiring records to be kept of all traffic stops and misclassifying many Latinos booked into the county jail as black.

The North Carolina chapter of the Americans of American Civil Liberties Union issued a public plea Tuesday that motorists around the state come forward if they believe they are the victims of racial profiling.

“We have been receiving troubling reports of discriminatory policing by the Alamance County Sheriff’s Office for years,” said Chris Brook, the legal director of the ACLU of North Carolina. “The findings released today confirm our fear that such discriminatory tactics are a systemic problem. We call on Alamance County to work with the Department of Justice to promptly adopt comprehensive policies addressing the pervasive pattern and culture of unconstitutional discrimination.”

Perez suggested the actions of Johnson and his deputies were not only illegal, but impeded the ability of the Alamance officers to solve serious crimes by sowing distrust within the community and making Latinos scared to call law enforcement. The sheriff’s current 4-year term expires in 2014.