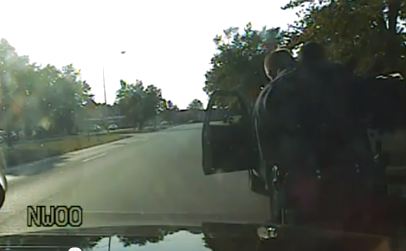 LANSING, Mich. — A Dearborn, Mich., police officer was caught on tape telling a man and a woman that he was issuing them traffic and marijuana possession tickets because he was “aggravated” that the woman failed to disclose her HIV-positive status before he searched the couple’s car. The incident has raised allegations of discrimination and violations of civil rights.

The police dashboard video, obtained by the American Independent through a Michigan Freedom of Information Act request, shows what should have been a routine traffic stop last month. During the traffic stop, the officer discovered the woman is HIV-positive when he allegedly found her HIV medications and asked her, “What are these?”

Advocates for those living with HIV say the type of incident the video portrays has a wide-ranging impact on the personal well being of people with HIV. They say that these types of incidents could have adverse public health impacts, discouraging HIV patients from taking their medications as prescribed and, therefore, potentially facilitating the development of drug-resistant strains of the disease.

The video shows Dearborn Police Officer David Lacey telling Shalandra Jones that she should disclose her HIV-positive status whenever a police officer asks her to step out of a vehicle. He said he was “pissed” that Lacey hadn’t disclosed her status before he searched the vehicle, and he told the couple: “Honestly, if it wasn’t for that, I don’t think I would have wrote anybody for anything. But that kind of really aggravated me, you know what I mean? You got to tell me right away, ‘I’ve got this. I’ve got that.’ ‘Cause at that time, I wasn’t wearing any gloves.”

Legal experts say there is no legal obligation in Michigan for a person with HIV to disclose his or her status to a police officer.