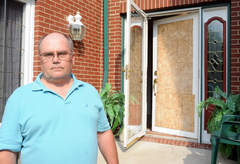 BEACH PARK — A family is still wondering what happened when a package was delivered and then 10 minutes later drug raiders burst through the front door.

Architect Paul Brown was in the basement of his home at the end of Adelphi Avenue when he heard a “huge noise” Friday afternoon that drew him up the stairs where he was meet by gun in his face.

He was handcuffed and placed on a chair. And a gun was still pointed at his face.

“They wouldn’t tell us why they were there,” he said. Afterward, he was able to piece some of what happened together.

A package was delivered, it was about 18 inches by 18 inches 22 to 24 inches tall, by a postal inspector and was accepted outside the open garage by Brown’s son-in-law, Wilmer Aries, 28, who is married to his daughter Ericka, 23, who also live in the home.

Aries brought the package, with a name of someone who did not live there, inside the house and placed it inside the front door in the foyer. It was never opened, according to Brown.

Ten minutes later, police officers with the Metropolitan Enforcement Group smashed in the front door and began ransacking the house, even pulling out insulation in the basement.

“They crashed things, they smashed things,” Brown, 58, said. “You couldn’t walk into a room because everything from the drawers was thrown around and emptied onto the floor.

“The garage door was open. They could have just walked in,” he said. “They didn’t have to crash the front door down.”

In the end, police found no drugs and took the box that police said contained marijuana with them, Brown reported. He never got to see the box, but his son-in-law thought the first name on it was Oscar and some other last name. It did have their address on it.

The search warrant address listed Brown’s house as being in Waukegan, but it is in Beach Park. No arrests were made.

News-Sun calls to the Metropolitan Enforcement Group were not returned. Brown also has called MEG and has not been able to get them to return his calls.

“It’s pretty shadowy and pretty bizarre for us,” he said of the two-hour ordeal that began around 4 p.m. Friday. “I was terrified. My chest was hurting and I am a diabetic and prone to heart attacks.”

Watching the officers fist bump and high-five each other as they tracked broken glass from the front door through the house also irritated him.

“I was basically held hostage,” he said.

“We’re not hard to investigate,” he said of himself, his wife, Bessy, his daughter and husband, and Wilmer’s brother, Victor Aries, 32, who all live at the home.

His 77-year-old mother-in-law also lives with them and she was in the kitchen when the raid happened. Police gave her the search warrant to read instead of giving it to Brown.

“We live a very simple life,” he said, “We all work. No one does drugs here.” His son-in-law works in general construction and his brother works for a security firm.

“They were upset they didn’t find anything. When I asked them who was going to pay for the door they basically said, ‘Not us’,” said Brown, who noted the door on his luxury home was valued at $3,000 some 12 years ago and the lock set was another $130 from Home Depot.

“We’re just trying to pay our bills here. We’re regular people,” said Brown. “It must have been worth a lot because they wouldn’t have gone through all this trouble.”

Now, though, he’s worried that someone put the wrong address on the package and perhaps they will come looking for him for their drugs. “Who would be sending that?” he asked. In a way he doesn’t want to know.

But now he questions the occasional errant mail or telephone call that comes to the house. “There’s something going on out there,” he said, “It’s bizarre.

“The door’s ruined and they left my house in a shambles and they don’t care. Now they won’t return my telephone calls. They’re supposed to be on our side,” he said.

He has hired an attorney, Christopher Cohen, to look into filing a civil suit.

“Unfortunately, the Browns were innocent bystanders in the war on drugs,” Cohen said Tuesday.

While the Browns support law enforcement “they do not support damage to the property of innocent families without restitution,” said Cohen.

“She’s afraid to even take a nap on the couch now,” he said. “I can hardly sleep. It changes your frame of mind.”