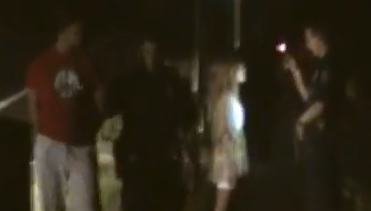 The write-up below was written by Debbie Russell and shared as a Note on Facebook at 5am this morning. Though the incident it explains is unfortunate, it serves as an excellent example of how best to mitigate such instances.

When the interaction with those who claim to “serve and protect” got tense Antonio Buehler informed his friends via a system that blasts-out text messages to those who previously subscribed. That information was then disseminated in a timely manner. This makes a huge difference. It means those who want to support their caged friend have information on which to base their actions – how to frame things to passerbys, on press releases and to the media. Also, it names names. Instead of casting blame toward the entire “Austin PD” it’s known that Pat Oborski and his colleague Johnson were the principle actors.

You’ll recall Buehler was kidnapped and caged less than a month ago for engaging in much the same action – using his videocamera to film a police interaction to ensure a transparent record of the interaction existed. And on New Years, he was arrested for taking pictures of two Austin PD officers, after he was asked to do so by a woman being roughly arrested by Robert Snider and Pat Oborski. Oborski’s response then was to falsify his report, which was later proven to be full of lies thanks to a witness who’d recorded the interaction from across the street with his cell phone. Click here for all related posts. That incident and those who coalesced around it spawned the Peaceful Streets Project.

Note that on Wednesday of this week fellow Austin activists John Bush and Michael Medina were told they were “guilty” for recording police interactions earlier this year. Perhaps Oborksi and Johnson believed their rights-violating actions toward Buehler and Dickerson will similarly be overlooked.

Let’s work together to hold the real aggressors accountable. Connect with Peaceful Streets, Cop Block, another outlet, or start something new.

Austin Police Department
http://www.ci.austin.tx.us/police
(512) 974-5750 (this is the main APD number)
(512) 974-4211(this is the number for the recruiting office, which is answered by a person who can forward you call appropriately instead of trying to navigate through APD’s phone tree)

At approximately 2am this morning, Antonio Buehler and Sarah Dickerson were arrested by APD for witnessing an arrest.

This, after a night on 6th St. where APD had followed and filmed Peaceful Streets Project members (PSPers) filming police. PSPers noted APD now has some rather expensive cameras and are spending a lot of resources witnessing PSPers witnessing them.

Buehler’s attorney, Joe James Sawyer, said 3 1/2 weeks ago following the 2nd arrest of Buehler for filming police that “APD is on the losing end of the wrong fight. This is the beginning of a real war, and it’s one they are going to lose.  The Supreme Court of the United States has spoken to this…the People have a right to watch.”

The arrest took place at 1219 W. 6th St. near Pressler after Peaceful Streets Project members pulled their car over to witness a DWI stop. They were approximately 30′ away from the detention when none-other-than Officer Oborski (the arresting officer of Buehler last New Year’s Eve-photo attached, taken by Buehler recently) shined a flashlight in Buehler’s face, yelling, “Mr. Buehler, back up!” Then Officer Johnson stepped in and repeated the “back up” command, to which Buehler said “how far?” Buehler again moved back another 10′ but Johnson told him to “move over there or leave.” He motioned to the other side of the police vehicle, putting him CLOSER to the detention – an illogical command. Buehler continued to protest this illogical issue, while backing up further, saying that he wasn’t interfering and was complying with orders to move AWAY from the scene.

Johnson said again, “move over there (closer to the detention) or leave” at which point both PSPers were nearly 60′ away, and Buehler responded, “fine, I’m leaving,” as he proceeded to walk away. It was this point that Johnson and Officer Holmes announced they would be arrested.

Holmes then walked Buehler within a few feet of the detention to proceed to the APD vehicle, belying the notion that getting too close to the scene puts anyone in jeopardy. Both cameras were confiscated on scene, and not checked in with them as personal property at the jail…meaning they won’t be returned to arrestees and it wouldn’t be surprising, based on past history, if this video were to be erased/destroyed.

Activists were alerted immediately to the arrests as Buehler placed a call to the Lone Star Liberty Bell network.

APD continues to harass people who are peacefully filming even after issuing new guidelines which were obviously being respected by PSPers…at no point did they violate the law as they complied with orders – or the logical ones being given. This is merely an intimidation tactic, intending to chill our 1st amendment rights to witness public servants in the line of duty.

Austin Police Accountability Coalition has been calling on APD to implement a real video policy, modeled on Washington DC’s concise policy (attached). It says, in part, that police are not to “(i)n any way threaten, intimidate or otherwise discourage an individual from recording members’ enforcement activities.” And as Buehler continued to ask questions about the appropriate place to witness the arrest, the DC policy goes on to note this is not a justification for arrest (in accordance with Supreme Court ruling).  The policy says officers “are reminded that there is no justification for ordering a person to stop … unless the member reasonably suspects that a person has committed, is committing, or is about to commit any crime.”

Filming police is NOT a crime.

The video below, by YouTube.com/RepublicOfTexasTV shows Buehler and Dickerson being arrested: