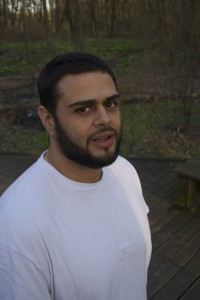 I copied and pasted the article verbatim.

TRENTON — An appeals court decision published yesterday has reinstated a lawsuit against city police by a documentary filmmaker who says he was harassed by police.

In the suit, Kelly “Kell” Ramos of Trenton says city cops threatened him several times in 2006 while he was shooting a film in which he followed gangs in Trenton.

“The first night we were all filming I got locked up with all of them,” Ramos said in a phone interview yesterday. “We got put into the paddy wagon and taken down to the station. They took my camera.”

Ramos, 36, an independent video producer, said he was trying to document the emergence of gangs during a tense time in the city.

“There were people getting killed every day back then,” Ramos said. “At that time (the cops) were at war with them.”

After more than a year of incidents in which he was threatened by officer Herbert Flowers and other officers, Ramos said he needed to stand up for his civil rights.

“It was more self-defense,” Ramos said. “I just wanted to be left alone and respected for what I do.”

In a lawsuit filed in 2008 against Flowers, the city police department, the city of Trenton and the Trenton police chief, Ramos said the police interfered with his constitutional right to free speech. A judge earlier had dismissed the lawsuit, and Ramos appealed.

The attorney representing the city and the police did not return requests for comment yesterday.

The appellate court ruled that because Ramos was filming a documentary, which is considered journalism, he is entitled to the protection of freedom of the press.

“A documentary about a subject of public interest, such as urban gangs, is a form of investigative journalism, and the process of preparing such a documentary is a form of news gathering,” the appellate judges wrote in their decision.

The decision also says the police did not have a right to hinder Ramos’ ability to film their interaction with the gang members because police activity is often videotaped.

The appellate court decision calls for further proceedings to determine the outcome of the lawsuit.

The Associated Press contributed to this report.