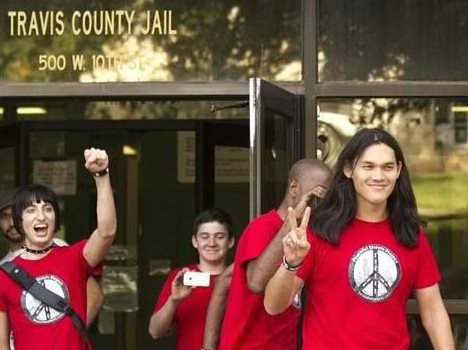 Carlos Miller of Photography is Not a Crime shared the following:

The Austin Police Department introduced a “training bulletin” last month meant to educate officers on how to legally deal with citizens who record them in public.

But all it did was allow officers to create their own laws in order to justify arresting these citizens.

And that was probably the intent of it considering they are dealing with a growing number of activists who record them in public, including one incident in which activist Antonio Buehler outed an undercover cop on video last month.

That same cop, Justin Berry, arrested Buehler two nights later while in uniform, marking the second time since January that Buehler had been arrested for recording cops.

It was an obvious case of retaliation for the video that exposed him in a popular bar area targeting young, underage women who were consuming alcohol.

Two days later, Austin police sent out the memo stating that even though citizens have the right to record them in public, police have the right to arrest them for “interference of public duties” if they don’t move back when ordered – even if they are already standing at a respectable and reasonable distance from the investigation as Buehler was during his second arrest.

They then announced that they are working on a policy that would prevent citizens from recording them from within 50 feet, which shows their audacity towards the Constitution.

Even though they eventually had to admit there was no legal way they could enforce a 50 foot rule, they stated they would leave it up to the officers as to how far back citizens should stand when recording.

So it’s not surprising that police arrested Buehler a third time last Friday while he was recording a DUI traffic stop.

Then they arrested his friend, Sarah Dickerson, for recording the arrest.

Although police confiscated and have yet to return their cameras, both arrests were captured on video by a third activist who was standing further back, which you can view above.

All three activists are members of the Peaceful Streets Project, an organization launched by Buehler after his first arrest in the early hours of New Year’s Day where he is still facing ten years in prison for allegedly spitting in the face of an Austin police officer named Pat Oborski.

The January incident was unknowingly caught on video by a random citizen across the street, which revealed that Oborski was assaulting Buehler rather than the other way around as he had written in his report.

Buehler, 35, is a West Point graduate who became an army lieutenant before earning an MBA from Stanford, so he’s not afraid of a challenge.

He has been relentless in shining a light on police abuse, building a huge following while doing it.

Read more at Photography is Not a Crime