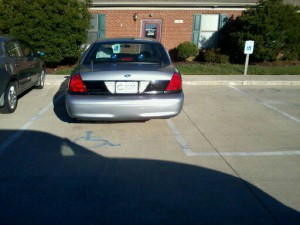 I took this photo on 9/24/12  in FrankFort, This is a post 12 captain who is taking his kid to daycare. I called his post to complain and the captain who was parked gave me a call back. At first, he played it off like he was “investigating” my complaint, but when I asked if it was he that parked there, he paused about 5 seconds and replied yes. He became very defensive and said, “If you would have looked, you would have seen I left my car running, so it was not “parked.” He admits he left his car running, unattended, in a handicap zone at a daycare. He went on to say it was “no big deal and is a minor infraction” and that I ought to just “let it go.”

Parking violations are clearly a minor concern compared to all of the severe brutality and misconduct occurring at the hands of government employees, but this just helps to highlight the double-standard that police officers often believe they have. If we allow officers to act in a certain manner, yet continue to harass others when they do the same thing, we are accepting their irrational notion that they believe they have extra rights than other individuals. Does it matter what the action is? If I ingest a drug and am caged for it, then the officer goes home and ingests the same drug he just locked me up for, that is hypocritical – the same goes for parking or any other action. -Kate