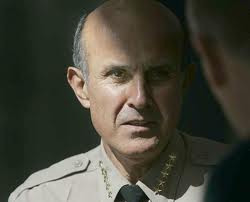 Investigators for a blue-ribbon commission issued a searing critique of Sheriff Lee Baca and his top assistants, accusing them of fostering a culture in which deputies were permitted to beat and humiliate inmates, cover-up misconduct and form aggressive deputy cliques in the L.A. County jails.

Baca was described as an out-of-touch boss who was “insulated … from force issues and other bad news” by his underlings. Members of his command staff, investigators said, tolerated a “code of silence” and failed to control and thoroughly investigate deputies’ force against inmates. Some department leaders “had a lax attitude toward deputy aggression and discouraged deputy discipline,” the investigators said.

Another source claims that, “A damning presentation by investigators to a county commission examining jail violence depicted Baca as a disengaged and uninformed manager who failed to prevent abuse of inmates by jail deputies. Federal authorities are investigating his department, including whether his deputies brutalized prisoners and harassed minority residents of the Antelope Valley. And the sheriff is facing growing political pressure to overhaul his jails and revamp his senior management team.”