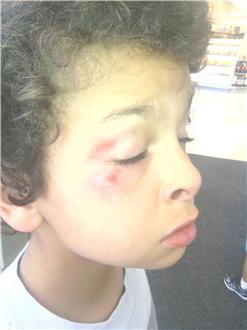 At Baldwin South Intermediate School in Quincy, Illinois a school official called the police to deal with a “meltdown” of an autistic 9-year-old boy named Roger Parker, Jr this past Friday. Roger was sent to a specific area to calm down by school officials. When Roger decided to climb a dividing wall, instead of calling a parent to come and pick up the child, the school officials made the decision to call the police. Calling the police almost always makes situations worse.

The officer who arrived, Officer Bill Calkins, pulled Roger by his arms and legs, in an attempt to physically remove him from the wall. The officer pulled him in a manner which caused Roger to hit his eye against the divider.

After causing injury to Roger’s eye, the officer tried to restrain him. In response to the natural instinct to get away from an attacker, or someone inflicting harm, “Roger swung around and kicked the officer in his nose,” according to Brandi Kirchner, Roger’s mother.

Roger was pulled to the floor, handcuffed, and taken to the police station where his mother was told that he was being fingerprinted, photographed, and booked for aggravated battery to a police officer.

Quincy Public School District interim superintendent Cal Lee said the school is conducting an investigation, but that details of that investigation or actions taken will not be released to the public.

Kirchner stated that she recently discussed a plan on how to handle her son if he has an outburst, and is upset that it was not followed and that her son was placed in handcuffs before she was ever contacted. Roger’s mother plans to request an investigation by the Quincy Police Department, although unfortunately it will probably be stated that the officer’s actions were justified; they certainly were not.

Roger was, according to Copley, not fingerprinted or photographed, but paperwork was filled out and sent to the juvenile probation office.

As they ought to, many parents have questioned the actions of the officer against the child with special needs.

Lee, the superintendent, said that the school has plans in place for students with special needs, and in many classrooms, teacher assistants called “Star Guides” who are also there to help. There were Star Guides in the room during the interaction on Friday.

The arresting officer, Bill Calkins remains on duty and faces no repercussions. Meanwhile, Kirchner removed her son Roger from the Quincy Public School system and is investigating home schooling options.

A strange man walking into a classroom and using physical force in an attempt to coerce a child who is not harming others into complying with demands is absolutely not an appropriate way to deal with the situation. Also, to arrest a child for acting on his logical instinct to prevent someone from further harming them by running – or kicking – is completely absurd.

I strongly advocate not sending your children to any place that handles situations in such a manner. As I said, calling the police usually makes the situation worse, and calling the police is what most public schools resort to when they don’t know how to handle a situation. If your child decides to climb up on something that teachers would prefer he or she does not and is feeling a little bit uncooperative, they could be assaulted, arrested, and face criminal charges – all before their tenth birthday.

1k
SHARES
FacebookTwitterGoogleRedditTumblr
DiggLinkedinStumbleuponMailPrint
You Can Support Cop Block by shoppping on Amazon using the banner below:
BANNERS ARE CLICKABLE