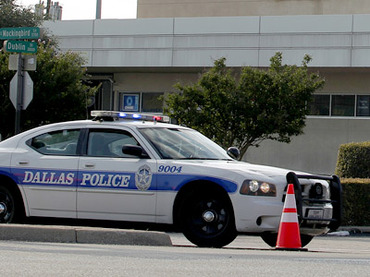 A Texas cop is on restricted duty after killing an unarmed man, while other officers are on the hook for trying to destroy documentary evidence of the event.

A police officer in Texas shot an unarmed man before colleagues confiscated and deleted video and mobile phone evidence of the event, which is now under criminal investigation.

The victim, Michael Vincent Allen, was chased by police in the Mesquite area of Dallas, Texas for 30 minutes at speeds of up to 100 miles an hour in a pursuit that involved police forces from multiple counties.

Allen eventually pulled into a cul-de-sac, when cops say he tried to ram his way past two patrol cars that had boxed in his pickup truck.

The officer who fired the shots, Patrick Tuter, said that it was at this point that he feared for his life, leaving him with no choice but to open fire on Allen.

Allen was shot 41 times, which means Tuter had to have reloaded his gun at least once.

Mitchell Wallace, who saw the altercation from his house, was asleep when the gunshots began, but quickly woke up in time to see Allen’s female passenger, who miraculously was uninjured, being pulled from the truck and a police dog jumping into the cab, which then bit Allen in the neck and jaw before dragging him to the pavement.

Police then flipped Allen onto his front and checked his pulse, the witness said.

Autopsy results have yet to show whether it was the bullets or the German Shepherd that killed him.

Wallace took pictures and shot video of what he saw of the incident on his mobile phone, which was confiscated by police at the scene and returned three days later with the pictures deleted.

Texas law states that police need a court order to confiscate a camera unless it was used to commit a crime.

It was reported in the Dallas Morning News that local journalist Avi Adelman believes the confiscation and destruction of Wallace’s photographic evidence were illegal, and violated Wallace’s First and Fourth Amendment rights (which provides for freedom of speech and the press, and prohibits searches or seizures without a warrant, respectively).

According to Adelman, it’s not the first time Texas police have acted outside the law with regards to photographic and video evidence.

In this latest incident, a dashboard camera from a squad car proved that Officer Tuter’s statement that he acted in self-defense when rammed by Allen was a lie.

The camera revealed that Tuter himself had crashed his patrol car into Allen’s truck before opening fire.

Mesquite city councilor Rick Williams issued a statement to the Dallas Morning News, saying, “Some of the allegations regarding this incident do raise questions that need to be carefully examined.”