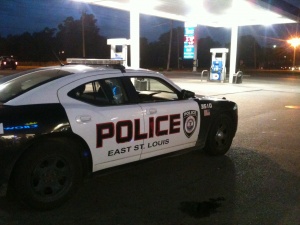 EAST ST. LOUIS (KMOX) – Angered by the recent murders of four young people,  the mayor announced today that police are going to impose drastic new measurers to keep teens off the streets.

“There is something going on in the community at this point that we’ve got to safeguard them and keep them off the streets,” Mayor Alvin Parks said. “There are people shooting at each other for no reason whatsoever.”

Among the new rules:

**Minors are to be off the streets at ten o’clock on both weeknights and weekend nights.

**Minors on the street during school hours will be arrested on sight.

**Police will also perform I.D. checks on street corners and conduct gun searches, and Parks says he won’t hesitate to call in the National Guard if the spike in violence continues. “The loiterers will be arrested, not warned, but arrested. Those who are hanging out at 11th and Bond, 15th and Lynch, 38th and Waverly, wherever you happen to be, if you are loitering, you will be arrested.”

“No royal blue, no bright red to be worn by our men or our boys in this community,” Parks said. “Why is that? Those colors have long been affiliated with gang kinds of affiliations”

Asked about Constitutional concerns, and the need for probable cause, Parks says the recent wave of crime is the probable cause and justifies the extreme new measures.

“Vehicles that are moving will be stopped and searched for guns, weapons, drugs, and open alcohol and any other violations that are taking place,” Parks later told KMOX’s Mark Reardon. “People who are walking, people who are bicycling, can be stopped and searched for the same and, when it comes to state IDs, we’re going to be confirming that state IDs are in place for everyone involved.”

Parks noted the legal questions surrounding his new policies but said “most importantly, we have to do something.”

“We have desperate times, they call for desperate measures and they call for extreme measures, things that we may not have done before, to get the desired results. You cannot grow as a city if your children are being wiped out and never given an opportunity to live.”