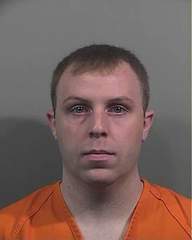 Chris Davis shared this story that was published at WHAS11 with us.

The Sheriff’s Department says Farson was fired Friday from his job at the Arrestee Processing Center in downtown Indianapolis.

Farson told investigators he had accidentally downloaded the images while trying to download adult pornography.

No evidence was found that Farson had downloaded pornography on department computers.

Farson could not be reached by phone Saturday. There was no home listing in his name.