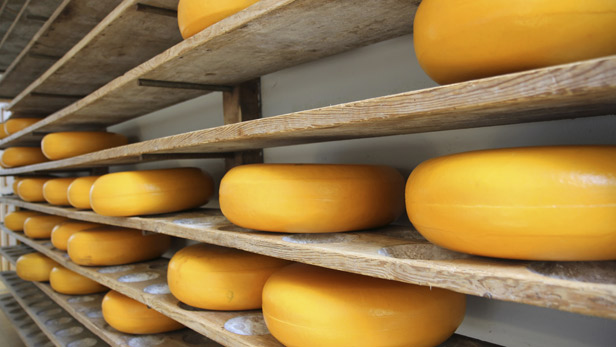 We have always been huge fans of cheese, but our dedication to the cause can’t beat that of Canadians, who have resorted to smuggling the stuff to satisfy their appetites.

In the ‘Great White North’, cheese lovers pay three times as much as those in the U.S and one group of unscrupulous* entrepreneurs has just been busted for running a smuggling ring accused of illegally importing $200,000 of mozzarella.

This week, three men including a police officer were arrested and charged over the large-scale smuggling scheme to distribute cheese products and other food items into Canada, according to Niagra Regional Police Service.

The “brick” cheese, commonly used by pizzerias, was allegedly smuggled over the border in cars at a profit of up to $2000 per trip.

Restaurants were reportedly offered cases of the smuggled mozzarella at discount prices, but no vendors have been charged.

Scott Heron, Casey Langelaan and Bernie Pollino, are all facing charges of conspiracy to commit an indictable offence and keeping, acquiring or disposing of Illegally imported goods.

Canada’s dairy regulations and taxes are to blame for the country’s high cheese prices — but it isn’t the first food to become a profitable black market commodity.

Each year, roughly 28 tonnes of Himalayan truffles are smuggled into Europe and sold as fresh Perigord and Italian truffles, fetching thousands of dollars per kilo. Tasteless imitations also continue to be manufactured in China and sold overseas.

Demand for Blue-Fin Tuna, worth up to $450,000 for a single fish (yes, you read that right) has sky-rocketed as sushi restaurants pop up all over the world, but fishing quotas have forced the profitable business underground.

*Unscrupulous? Seriously? If anyone is unprincipled, it is the people who are assisting in caging others for transporting and distributing cheese. Obviously, this is not protecting anyone; the overall incentive is financial – if people are not able to buy their cheese elsewhere because their cheese distributors have been caged or scared away, (assuming they don’t want to buy a cow and make their own cheese) their only option will to be to buy from the businesses within the arbitrary political boundary which the Canadian “government” claims authority over. In other words, they only want people to buy their cheese from the businesses they try to justify stealing from on a regular basis. Entrepreneurs ought to be able to transport goods, whatever they may be, across arbitrary political boundaries without fear of harassment or imprisonment. Besides, competition is healthy in the marketplace.