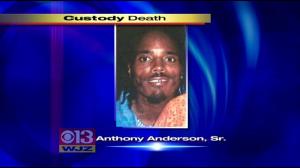 Posted by Thomas DiLorenzo at LewRockwell.com on October 3, 2012.

Some of Baltimore’s “first responders” making their serving-and-protecting rounds recently jumped out of their car and murdered a man by picking him up over their heads and dropping him to the cement head first. Their initial “defense” was that he supposedly deserved what he got since he had drugs in his system and, anyway, that’s what killed him. The coroner has found otherwise — that he died from blunt force trauma, broken ribs, a lacerated spleen, and worse. The death has been ruled a homicide.

Question:  If you and a few pals did this to someone, would your employer give you a paid vacation (a.k.a. “paid leave”)? Would you be defended by labor unions and by people within the local government? Would they lie for you about the cause of death? No? I guess you’re not a cop then.

BALTIMORE (WJZ)– He died in police custody and now the medical examiner has labeled Anthony Anderson’s death a homicide.

Mike Schuh has more on what’s in the autopsy report and reaction from the victim’s family.

Initially, police said he choked on drugs but according to this autopsy report, that’s not true. Now his family is demanding justice.

The report from the Office of the Medical Examiner confirms what the family of Anthony Anderson, 46, already believed. His death in police custody was ruled a homicide.

“We want these officers fired. We want them arrested and we want them convicted,” said Anderson’s sister, Nancy Harvey.

Anderson died Sept. 21 as he was leaving a liquor store near Montford Avenue and Biddle Street in East Baltimore.

Multiple witnesses say an officer investigating drugs grabbed Anderson from behind, hoisted him into the air and slammed him down on the pavement, leaving him unresponsive.

“They even got to the point they were trying to tell him to get up and they were kicking him. He never moved,” said a witness.

The official cause of death: massive internal bleeding from blunt force injuries, including a ruptured spleen and multiple fractured ribs. His family’s attorney says that justifies second-degree murder charges against the officer and a civil lawsuit.

“I’m hoping that this officer will not be treated any differently than anyone else who murders someone in the streets of Baltimore City, because that’s what this family and that’s what I consider it to be,” said J. Wyndal Gordon, the family’s attorney.

A spokesman says after the investigation is over, the city state’s attorney will decide what, if any, charges should be filed against the officers involved. There’s no timetable on when that could happen.

The police union president told WJZ’s media partner, The Baltimore Sun, he believes the evidence will show the officers followed police protocol in taking down Anderson and that he died as a result of his fall.