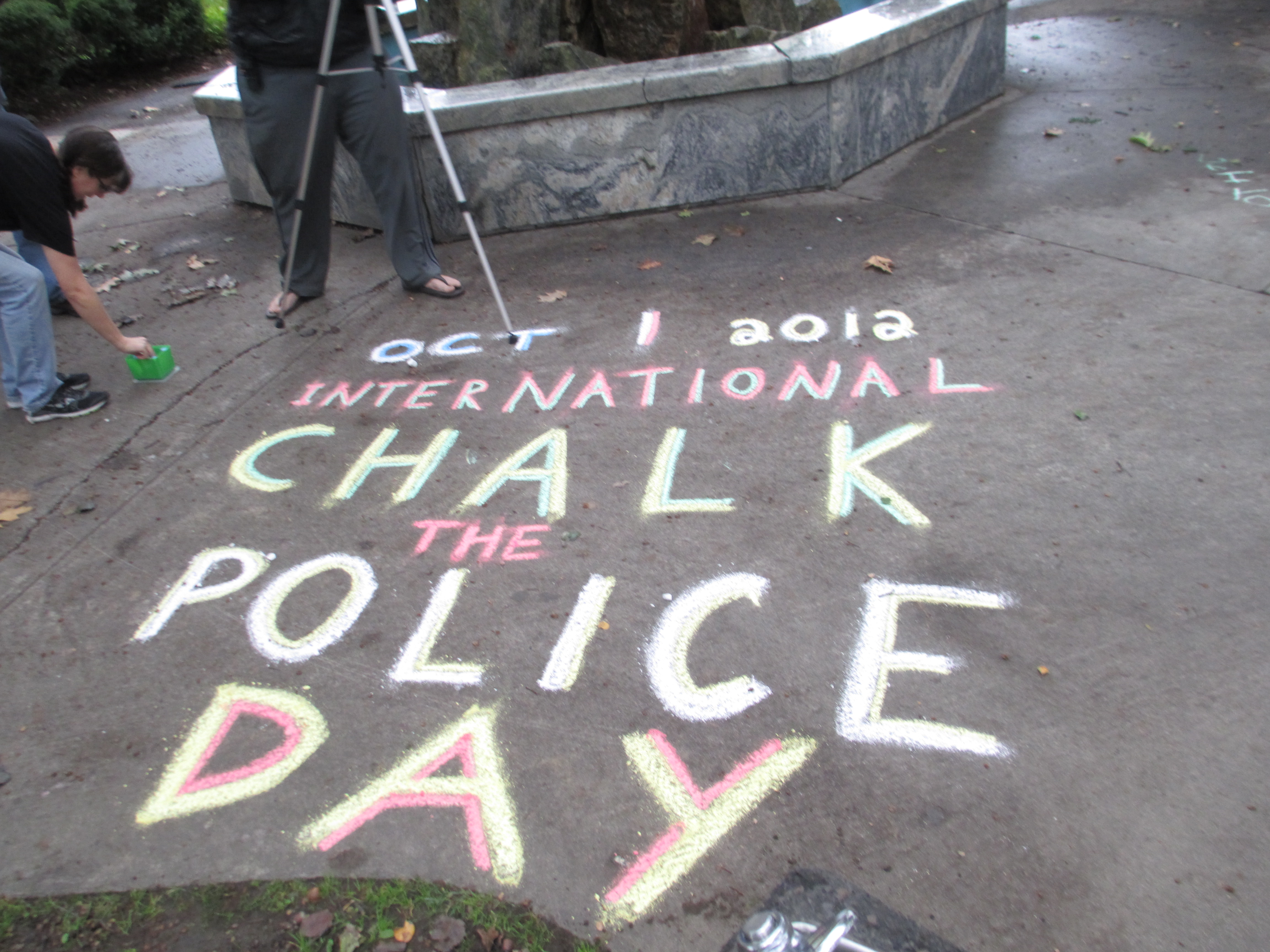 First of all, thank you to all of those who participated in this year’s Chalk The Police Day, and thank to all who entered the contest and submitted works of chalk art from everywhere.  We had entries from New York City, Los Angeles, Austin, Las Vegas, Oakland, New Orleans, Minneapolis, Keene, NH, Fond du lac, Wisconsin, and more!

We had an impressive number of submissions of chalk photos, and many people hit the streets to chalk the police stations, sidewalks and plazas nearby. Unfortunately, we were only able to choose one chalking for each of the categories for the contest: Best artwork/mural, Best Saying/Slogan and Best Location. All three of the judges chose this piece as the best artwork/mural of the submissions. For those following the world of political chalk art, the winner of the best artwork/mural may come as no surprise.  At Oscar Grant Plaza in Oakland, the Fresh Juice Party kicked off the Chalk the Police contest weekend with the full album here if you’d like to get a better idea on the process it takes to do a large mural. Congratulations! They won $66 dollars of Cop Block gear and a set of Eternity Art chalk that I hope they will use for a future piece.

While the Fresh Juice Party is hard to beat in this category, we would like to point out a few honorable mentions of other pieces of artful dissent:

We also had a unanimous winner with 3 out of 3 chalk judges making the same first choice for best location.  This year, unfortunately, Austin has had some run-ins with the chalking police; Chalk the Police day was no exception as two were arrested and video cameras were stolen by the cops. However, even with the police harassment at their event, they still managed to produce a provocative piece written on the side of the Austin Police Headquarters. Austin’s winner will receive $66 dollars in CopBlock gear from the store!

The chalking outside the LAPD headquarters also lead to at least one person, who has written her account of what happened that evening,  being detained and a pending “criminal investigation” as reported by the Los Angeles Times.  Sad as this overzealous attack by the police on chalkers is, this isn’t too shocking after the riot police attack earlier this year at the Chalk Walk event. This simple chalking caught two of the judges eyes as a nice statement of how chalk is a harmless, easy to wash away substance yet often what people are protesting with the chalk doesn’t wash away so easily.  Las Vegas had an impressive album of chalk murals and sayings if you browse through their complete album. Congratulations! They will also receive $66 of CopBlock gear.

This wasn’t the easiest contest to judge as there were many good submissions from all the cities, so please check out some of the full albums linked above.

We hope that everyone will continue to keep their chalking skills sharp and join us on October 1st next year to Chalk the Police.  Until then, stay safe and free!