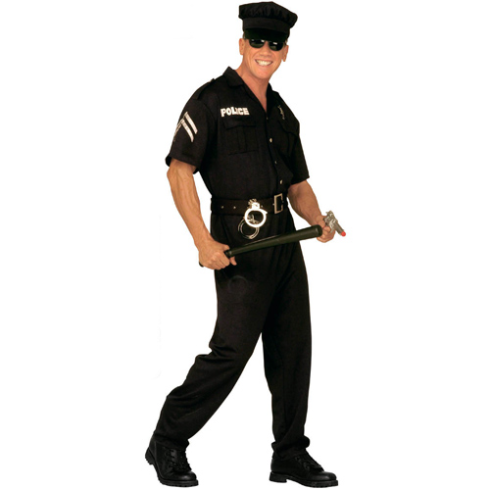 Chicago, IL – A 70-year-old former parole officer who was in costume for a comedy show says in federal court that police arrested him for impersonating an officer.

Percy Coleman says he owns the Cafe Peninsula, also known as the Unity Hall Cafe, in Riverdale, Ill. Because of a prior job as a parole officer for the Illinois Department of Corrections, the 70-year-old Coleman allegedly still holds an Illinois Parole Agent Concealed Carry Weapons Permit.

“On April 30, 2012, plaintiff Coleman’s son, Phillip Coleman, was hosting a comedy event at the Café Peninsula,” according to the complaint in the Northern District.

“At some point that evening, Riverdale Police Officer Koseluh and unknown officers arrived at Café Peninsula.

“The officers announced that the building was being closed down. …

“Coleman was preparing to take his diabetes medication when a security guard called Coleman to the entrance to respond to Riverdale police officers.

“The security guard informed Coleman that police officers threatened to close the Café Peninsula for failure to have a business license.

“Coleman did not take his medication. Rather, he relocated to the entrance to speak with the police officers.”

Coleman says he identified himself as the owner of the business and told his son to retrieve the cafe’s business license.

During that time, “Defendant Officer Koseluh asked if Coleman was a police officer.

“Coleman responded that he was a peace officer.

“Coleman responded that he was a participant in the comedy show.

“Defendant Officer Koseluh struck Coleman in the head and grabbed a skull cap off of Coleman’s head.

“Defendant Officer Koseluh informed Coleman that he was being arrested for impersonating a police officer and for wearing body armor.”

When Koseluh asked Coleman if he had a weapon, and Coleman responded that he was armed, the officer allegedly “pushed Coleman’s face down onto the counter” and handcuffed him, “cutting of the circulation to Coleman’s hands,” according to the complaint.

Coleman was allegedly disarmed and placed in the back of a squad car for 45 minutes, during which time he was not allowed to take his diabetes medication.

“Defendant Officer Koseluh taunted Coleman by pouring small drops of water into his mouth, while Coleman remained handcuffed behind his back,” the complaint states.