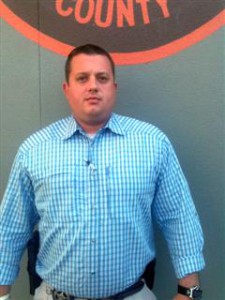 A manhunt for a missing Chattooga County investigator ended early this morning. Now he’s recovering from stitches around his right eye and answering possible cocaine charges.

“It was very uncharacteristic of him,” Chattooga County Sheriff John Everett said after returning from consulting with Alabama authorities this morning.

By 8 p.m. yesterday, officials were fearful something dreadful was wrong. Capt. Ken Anderson and the 9-1-1 Center got Verizon Wireless to track Hayes’ last cell phone location.

The phone company calculated the last known location Hayes used his phone was near Dover’s Cut Road. That’s where a multi-agency search began.

While volunteer firemen, state patrolmen and other lawmen looked for Hayes, events were unfolding in Alabama, off Hwy. 35 near the Little River Canyon Parkway.

“According to what we gathered at the scene, he was at a store. He didn’t go inside the store, but he was just at the store,” Sheriff Everett said. “There was a driveway that went beside the store to some rental property behind it. He drove the Suburban back there and just parked.”

A curious store employee checked on Hayes and was greeted with a gun pointed in her face, the sheriff said.

“At that time, he allegedly pulled a gun and pointed it at her face and pointed the gun at another male subject over there,” the sheriff said. “When he put the gun in the female’s face, allegedly the husband struck him in the face with a stick. It busted his eye open and they called 9-1-1. The Fort Payne Police and the Dekalb County Sheriff’s office got there. They were talking with Matt and found cocaine in his back pocket and cocaine in his shirt pocket.”

He also had 59 Hydrocodone pills in an attaché case in his sheriff’s vehicle. Officials worry those drugs come from the sheriff department’s evidence room.

Hayes is not only an investigator, but also the evidence custodian.

Yesterday Hayes was supposed to be destroying drug evidence from resolved 2009 and 2010 misdemeanor cases.

“He had some pills that he was going to grind up and flush them down the toilet,” Sheriff Everett said.

The sheriff says he will summon the GBI this morning.

Some of the people that worked with Hayes never expected any drug problems.

“It’s a shame because he was a real intelligent investigator,” Capt. Anderson said.