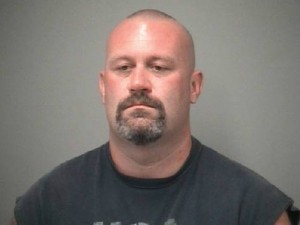 SAGINAW – A jury in Saginaw has convicted a 37-year-old suspended police officer of first-degree murder in the extension cord strangulation of a woman eight months pregnant with his son.

The Saginaw County Circuit Court jury reached the verdict Thursday in the trial of Kenneth Bluew. It also convicted him of assault causing a miscarriage and having a firearm in a felony.

He faces a mandatory sentence of life in prison without parole. A date for sentencing has not been set.

Bluew was with another officer when 32-year-old Jennifer Webb’s body was found Aug. 30, 2011 near a drainage ditch in Buena Vista Township, about 85 miles northwest of Detroit. An extension cord was around Webb’s neck and attached to the roof rack her sport utility vehicle.

A forensic pathologisttestified during a preliminary exam that he believes someone killed Webb by approaching her from behind and applying a “chokehold” on the woman. He testified Webb died due to “neck compression” and not because of “ligature strangulation” by hanging herself with an extension cord, though Buena Vista police initially classified her death as a suicide.