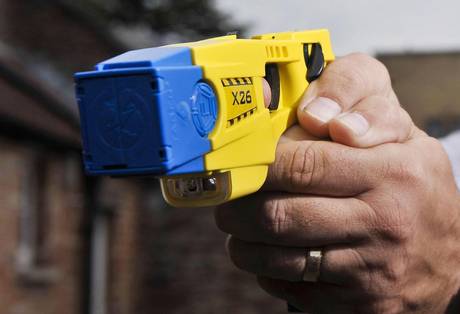 LONDON (Reuters) – British police apologised on Wednesday for using a stun gun on a blind man after officers mistook his white cane for a samurai sword.

Officers were responding to “a number of reports that a man was walking through Chorley armed with a samurai sword”, when they confronted Colin Farmer, who was on his way to meet friends in a pub last Friday, in the northern English town.

When Farmer, 61, did not respond to their calls to stop, one of the officers used his taser stun gun, which delivers a 50,000 volt shock.

Despite pleading with the police and telling them he was blind, he was handcuffed.

“It then became apparent that this man was not the person we were looking for and officers attended to him straight away,” said Chief Superintendent Stuart Williams in a statement, adding the innocent man was taken to hospital for treatment.

“Lancashire Constabulary deeply regrets what has happened. We have clearly put this man through a traumatic experience and we are extremely sorry for that.”

Police later arrested a 27-year old man in connection with the sword reports but released him without charge.

The incident has now been referred to the independent police watchdog for further investigation.