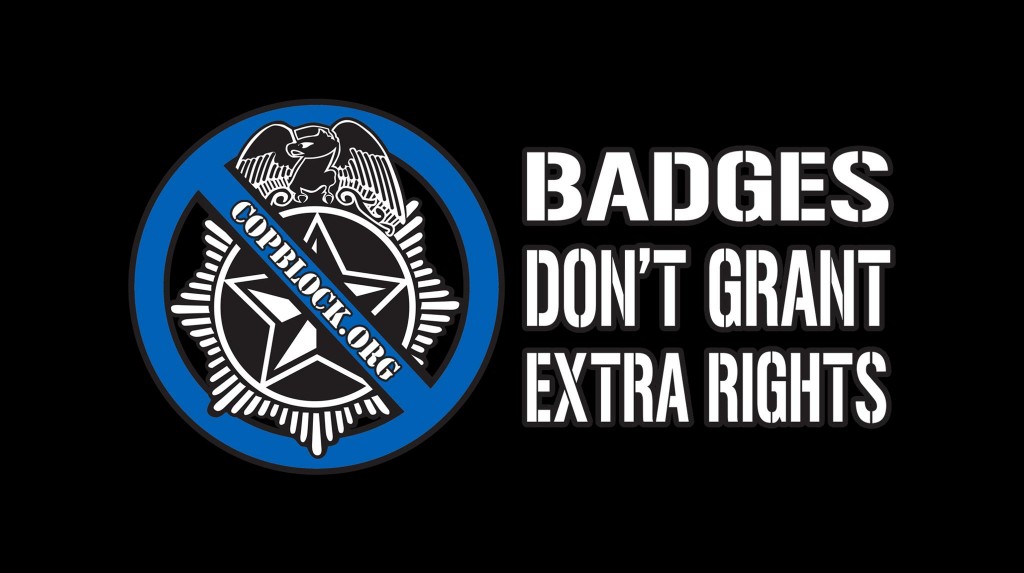 Know Your Rights: A Primer, the most-recent addition to the copblock.org/documents page, seeks to communicate how to effectively stand-up for your rights.

Of course it’s impossible for a few of us to outline all potential scenarios, just as it’s impossible for a person or group, no matter how smart, to create “law” (it’s really legislation conflated to be law, which comes from the bottom-up), so take from it what you find valuable to your situation. This is a working document and we welcome your input so that we can all learn from each other.

Thanks to Kelly Patterson, founder of Nevada Cop Block, and Clyde Voluntaryist, founder of Carolinas Cop Block, for their help making this document more-presentable. -Pete

Know Your Rights: A Primer

Live and let live – it’s an adage that, if put into practice, would help eliminate the need for these precautions. But right now some folks are putting faith into a bad idea – arbitrary authority. Fortunately, ideas have consequences.

Always document exchanges you have with police or those that you witness, preferably via video, if possible. Even better, stream the interaction in real-time to the Internet using a free smartphone application (see: http://copblock.org/apps). This prevents it from being erased or tampered with should your equipment be stolen by police. In addition, it can increase the speed with which word can get out should you need outside support.

Filming your interactions has several advantages. Most importantly, it will help to safeguard you at that moment, as it very-likely will deter potential aggression, and it will act as an indisputable, objective, transparent record of the incident. The deck is usually stacked against you in cases which come down to just your word against theirs.

Ask “Am I being detained?” Police employees default to being on the offensive. Strive to be calm, cool and collected, while confident – knowing that you’ve not acted in the wrong and in fact it is they who are acting with hostility. Ask yourself: what is reasonable?

Always strive to de-escalate situations, and thus increase the likelihood you’ll leave under your own volition rather than under the control of a stranger. It will also allow those who may later view video of the interaction to easily and clearly see just who is the aggressor. A video recording means that facts can be shared immediately with a large number of people; you can move more-quickly to the next stage, thus making it more-likely they’ll support you if needed and be more-likely to speak out against injustice themselves.

Police employees can and do lie – something that courts have ruled is perfectly acceptable – in an attempt to solicit information from you or to get you to admit to engaging in an action they believe gives them the right to kidnap and cage you (even though said action may not cause a victim). Be aware of this and act accordingly.

Police employees often make arrests they know to be without merit, simply as a way to harass those who question their authority. Several vague “go-to” charges are often used for such purposes including, but not limited to, disturbing the peace, trespassing, obstruction, interfering with an officer/investigation, failure to follow lawful orders, etc. In cases involving police brutality, charges of resisting arrest and/or assaulting an officer can often be used to justify the police employees own use of force (having the unbiased and unimpeachable witness that video represents is especially crucial in this instance).

They know there is usually very little chance they will be held accountable for such tactics. In most cases, the charges are later dismissed, but that doesn’t eliminate the time and indignities suffered by their victims during even a brief period within one of their cages. Pushing back against this culture of abuse is important both to protect your own rights and deter its future use against others.

Don’t panic. The world won’t end. Now is the time to engage in damage control and move-forward to mitigate any further harassment and to seek accountability for the real aggressors.

If it makes sense (if the incident is still timely and an impact can be had) it will be fed to http://copblock.org for a Call Flood – others, who have a grasp on your situation thanks to your write-up, and inclusion of relevant pictures and/or video, will call on your behalf and demand justice.

Submit a Freedom of Information Act (FOIA) request (note that this is known by different names depending on the area). Inquire of the police department if they have a form for this – they usually do not. Don’t fret. Just write and submit your own. Include a sentence or two overview of who you are, the information sought, and your contact information.

You can use the text below as a template:

“To Whom It May Concern:

“This document is to serve as a Freedom of Information Act request. Please provide to me any and all content, including but not limited to dashcam video and related audio, dispatcher logs, police reports, internal memos, related departmental policies, from the incident that occurred on DATE at LOCATION involving YOUR NAME & CASE NUMBER/CHARGES IF KNOWN. Also, please include any and all information related to the number, date, and outcome of complaints made against POLICE EMPLOYEE NAME/BADGE NUMBER.

“YOUR NAME PRINTED
YOUR PHONE NUMBER
YOUR MAILING ADDRESS”

When submitting the FOIA request, film the exchange – or better yet, have a friend accompany you who can film. The more transparency the better.

Ask for a receipt, or a signed/stamped copy of your FOIA request.

Inquire to learn the legislated time-limit the police department has to respond to your request (often five-ten days). Due to the inefficiency of the bureaucratic, centralized police department, you may be contacted during that time-frame to inform you that an extension is needed.

Note that you can be charged for copying fees of documents, video and other content. Be sure to state when you submit the FOIA request that you want to have the ability to review everything before it’s taken/paid for. That way, if dozens of pages of unrelated material are included, you won’t be on the hook.

Add the information gotten from the FOIA request to your post about the incident as an update. If you have access to a scanner, scan the documentation and save it to http://scribd.com. You can create a free account there if you don’t already have one.

If you’ve done nothing wrong, don’t be afraid. Instead, voice as loudly and clearly as you can, the rights-violations you suffered and continue to face due to the actions of the police employee and prosecutor.

Demand a jury trial, even for something as trivial as a speeding ticket. Currently about 95% of cases are plead out before that stage. That does nothing to disincentivize the same or a greater level of police statism. If we each stood-up for what we knew was right, it’d frankly be impossible for this level to continue, and in fact it would lessen until it reached the point where no one claimed extra rights based on their attire.

Work to get your situation on the radar of others. Create an event for a Call Flood. Share pertinent information so others can easily get on the same page. Cultivate media contacts and share them as well. Encourage those so-inclined to make calls on your behalf and to submit your story.

Court is called “legal land” for a reason. It’s an environment void of logic and common sense, where public officials who purport to be acting to obtain justice in reality act to safeguard themselves and their colleagues. Don’t be surprised at, or let yourself get worn down by, their actions. Stand on your conscience and know that, at the end of the day, you did no harm. Not only will this resonate with you but it will embolden others to speak out and do what they know is right, until one day, the harassment meted out by those with badges, and the double-standards others afford them, are no more.

Connect with others who know that badges don’t grant extra rights: http://copblock.org/groups

Check out all documents in the “Know Your Rights” Collection housed at http://scribd.com/copblock