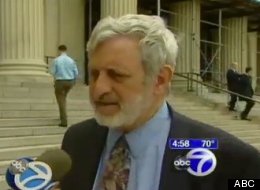 The following was submitted by Ian MacLeod.

A New York judge got his comeuppance after he happened upon an “unruly crowd” of citizens outraged over a team of police officers engaged in apparent police abuse.

The judge thought the crowd was out of control and the “officers may need help,” so he called 911 and told them the cops needed backup.

A few minutes later, one of the cops reportedly “became enraged — and the judge became his target.”

After screaming curses at the crowd, the cop walked up to the judge, who was in plain clothes at the time, and for whatever reason, decided to karate chop him in the throat.

Via The New York Times:
Thomas D. Raffaele, a 69-year-old justice of the New York State Supreme Court, encountered a chaotic scene while walking down a Queens street with a friend: Two uniformed police officers stood over a shirtless man lying facedown on the pavement. The man’s hands were cuffed behind his back and he was screaming. A crowd jeered at the officers.

The judge, concerned the crowd was becoming unruly, called 911 and reported that the officers needed help.

But within minutes, he said, one of the two officers became enraged — and the judge became his target. The officer screamed and cursed at the onlookers, some of whom were complaining about what they said was his violent treatment of the suspect, and then he focused on Justice Raffaele, who was wearing a T-shirt and jeans. The judge said the officer rushed forward and, using the upper edge of his hand, delivered a sharp blow to the judge’s throat that was like what he learned when he was trained in hand-to-hand combat in the Army.

The episode, Friday morning just after midnight — in which the judge says his initial complaint about the officer was dismissed by a sergeant, the ranking supervisor at the scene — is now the focus of investigations by the police Internal Affairs Bureau and the Civilian Complaint Review Board.

The judge said he believed the officer also hit one or two other people during the encounter on 74th Street near 37th Road, a busy commercial strip in Jackson Heights. But he said he could not be sure, because the blow to his throat sent him reeling back and he then doubled over in pain.

“I’ve always had profound respect for what they do,” Justice Raffaele said of the police, noting that he was “always very supportive” of the department during the more than 20 years he served on Community Board 3 in Jackson Heights before becoming a judge. At one point in the early 1990s, he added, he helped organize a civilian patrol in conjunction with the police. “And this I thought was very destructive.”

[…]The judge said he was in “a lot of pain” and went with Mr. Rashid to the emergency room at Elmhurst Hospital Center, where a doctor examined his throat by snaking a tube with a camera on the end through his nose and down his throat to determine whether his trachea had been damaged. The doctor, he said, found no damage; Justice Raffaele was released and told to see his personal doctor for follow-up care.

When they first came upon the crowd, the judge said, he was immediately concerned for the officers and called 911. After he made the call, he said, he saw that one of the officers — the one who he said later attacked him — was repeatedly dropping his knee into the handcuffed man’s back.

His actions, the judge said, were inflaming the crowd, some of whom had been drinking. But among others who loudly expressed their concern, he said, was a woman who identified herself as a registered nurse; she was calling to the officer, warning that he could seriously hurt the unidentified man, who an official later said was not charged.

Perhaps the judge should have joined the “unruly” crowd rather than rush to call for more goon-squads in uniform.

Remember the Judge who came upon an “unruly” crowd angry over police abusing a suspect and called 911 to “help” police get backup, only to be singled out himself by a raging cop who proceeded to assault him by chopping him in the throat? If you remember, he was a huge supporter of police, “I’ve always had profound respect for what they do,” he told the New York Times. Turns out, now that he’s the one in the victim’s seat, he’s had a change of heart. In fact, he says he’s now “amazed” how multiple police lied about what took place, he says his beating and the ensuing cover-up is “really changing my view of the force.”

Via The Huffington Post:
No criminal charges will be filed against an NYPD officer accused of violently striking a New York state Supreme Court justice in the throat in an unprovoked attack earlier this summer, the Queens district attorney said Wednesday.

Judge Thomas Raffaele, who reported the alleged assault, called the DA’s decision “shocking” and accused the NYPD officers involved of lying to cover up their misconduct.

“For this to happen, for me to be attacked by a cop — and for the cops to do this huge cover up — it’s really changing my view of the force,” Raffaele told The Huffington Post.

Raffaele said he is strongly considering filing a lawsuit against the police department over the alleged attack. “It may be that there is no other option,” he said.

In a statement, Queens District Attorney Richard Brown said his office lacked the evidence to prove beyond a reasonable doubt that the officer “intentionally and unjustifiably” struck the judge.

“We find that there is insufficient evidence of criminality to support a charge that the police officer acted with intent to injure,” Brown said.

The alleged assault on the judge happened as police officers were restraining a man who was reportedly chasing people with a metal pipe on a Queens street around midnight in early June.

Raffaele said he came upon two officers restraining the man and called 911 to request that more police respond to the scene, where a large group of people was gathering. The officer allegedly repeatedly drove his knee into the detained man’s back, the judge said, causing some in the crowd to shout at him.

At that point, Raffaele said the officer flew into a rage, began screaming obscenities and randomly attacked several people in the crowd. He said he was hit in the throat with a military-style open hand chop that sent him to the hospital for the night.

“This was not some little punch or shove,” he said. “It was an all-out military blow to my larynx.”

Raffaele said that supervisory officers at the scene refused to take his complaint of being assaulted.

In June, the NYPD said that its internal affairs bureau was working with the Queens DA’s office to investigate the judge’s claims.

That investigation cleared the officers involved in the episode of criminal conduct.

“After an extensive and thorough investigation of the facts and circumstances of the matter -– that included multiple witness interviews and reviews of police reports and medical records -– my office has concluded that the facts do not warrant the filing of criminal charges,” Brown said.

The matter will now be referred to the city’s Civilian Complaint Review Board and to the NYPD “for any possible violation” of NYPD rules or procedures.

Brown said that his office had “no opinion” as to whether any administrative or procedural violations took place.

Raffaele criticized the DA’s investigation as half-hearted and said that witnesses to the incident were not interviewed for nearly two months, and only after he complained about the slow progress of the probe.

He also accused several NYPD officers of lying about the events by saying that he had behaved “aggressively” toward them.

“I was really amazed that two or three of them lied about it,” he said. “It’s really damaging to the respect that I’ve had all my life for the police department.”

The question I have is how many times did this Judge side with police in his courtroom as the “credible” witnesses they clearly are not? Police constantly lie under oath, get caught, then face no penalty. As I wrote about the time I was called for jury duty, I was the only one who raised my hand when the Judge asked, “Would anyone be less likely, or more likely, to trust the testimony of a police officer by merit of his occupation?” Of course, I was kicked off the jury by the state’s prosecutor as a result.
_
Chris runs the website InformationLiberation.com, you can read more of his writings there.