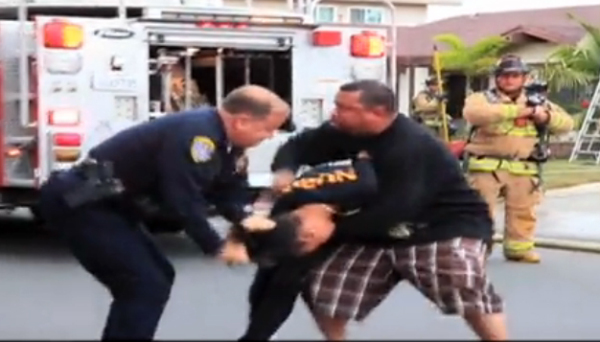 The San Diego Police Department is in the process of conducting an internal investigation into one of their own officers who’s being accused of misconduct on the job.

The police sergeant in question is Sgt. Daniel McLaughlin, who was caught on video scuffling with a woman who lives at a house that caught on fire Friday on Ilex Avenue and Green Bay Street in Nestor.

In the controversial video, McLaughlin can be seen pulling the woman’s hair after she appears to hit him in the face. The woman is hysterical, running toward her burning house during the altercation.

A man, who is reportedly the woman’s husband, holds her back as the officer walks toward her. After the scuffle, the woman was pushed away from the scene with McLaughlin following.

According to some neighbors – who identified the woman in the video as Torazzi Hayslett, a teacher at the Nubia Leadership Academy – McLaughlin went too far when he got physical with her.

“He looked like he had more aggression, trying to control the situation, trying to pull her down. He should’ve done a better job about it,” neighbor Enrique Gatay told NBC 7.

However, other witnesses who were shocked by McLaughlin’s actions were equally surprised that the woman would actually hit an officer in the first place.

“He shouldn’t have pulled her hair at all, but she shouldn’t have hit a cop. What was she thinking, hitting police? So, basically, [it was like] ‘You do this, I do that.’ [It] wasn’t right — what both of them did,” said Nestor resident Max Campos.

NBC 7 found that this isn’t the first time McLaughlin’s conduct on the job has been called into question.

According to records, he was involved in a 2009 incident in which a jury found that he used unreasonable force while dealing with a man who advocated for the homeless. The man was allegedly injured.

Attorney Matt Miller brought a case against Sgt. McLaughlin and the City of San Diego for using unreasonable force against John Ross, an advocate for the homeless.

According to the court claim, Ross was passing out water to the homeless in East Village when Sgt. McLaughlin pulled up and threw one homeless man against the wall.

“Mr. Ross is about 73 years old; he picked him up and he threw him on the ground,” said Miller.

“I am surprised that he’s still involved in patrolling certain areas of our community,” Miller said.

Meanwhile, Lt. Andra Brown said the SDPD is looking into the incident and investigating the allegations of misconduct.

In a statement released Saturday, Brown stated: “Due to allegations arising from this incident, we are conducting an internal investigation into the matter.”