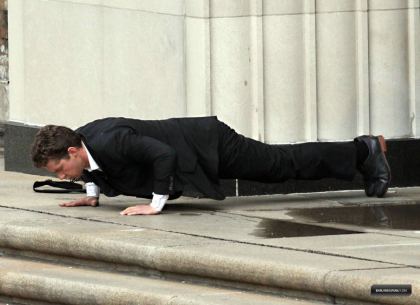 TULSA, Okla. (AP) — A Tulsa man filed a federal civil rights lawsuit against two Tulsa police officers alleging that one of the officers made him do pushups on the side of the road after the officer illegally searched his car and found no drugs.

The lawsuit by Brian Lumpkin, 24, says Tulsa Police Officers James Bohanon and Kevin Warne were conducting surveillance at a house where they suspected drugs were sold on Oct. 25, 2010.

The home, near the 4800 block of South Mingo Road, was under surveillance for “short traffic,” meaning multiple visitors throughout the day for a short period of time.

According to the lawsuit, Lumpkin was leaving his girlfriend’s house when the officers followed him and pulled him over without probable cause. Lumpkin has several previous drug convictions.

The lawsuit quotes a conversation allegedly between Bohanon and Warne recorded from Tulsa police radio traffic, according to the Tulsa World.

“Ah, he’s got nothing,” Bohanon said, according to the lawsuit’s transcript. “You want me to cut him some paper or just cut him loose or what?”

Warne, who was within eyesight but parked farther away, replied over the radio, “You didn’t smell any weed or anything like that?”

“Ah, it did kind of smell like weed,” Bohanon said, according to the lawsuit. “Naw, but he knows the deal. I imagine we’ll just go through the motions. I’m going to shake down the car real quick and just cut him loose if we don’t find anything.”

About 15 minutes later, the lawsuit’s transcript has Warne asking Bohanon if he should call him “Drill Instructor Bohanon.”

“Did you see that?” Bohanon asked while laughing, according to the lawsuit. “I told him, ‘Hey, you’re going to have to give me some pushups if you want to not get any tickets.’ ”

The lawsuit claims damages by deprivation of civil rights against both Warne and Bohanon and damages from excessive force by Bohanon.

“The actions of defendant Bohanon (were) willful, arbitrary and shocking to the conscience of civilized society,” according to the lawsuit.

The lawsuit was filed against Bohanon and Warne individually in U.S. District Court for the Northern District of Oklahoma by Tulsa attorneys Robert Burton and Kevin Adams.