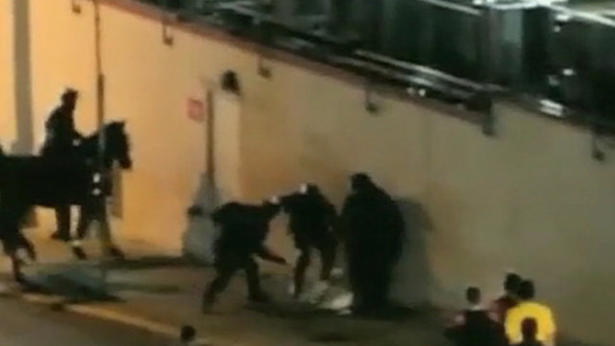 Those claiming authority over the arbitrary political boundary labeled Prince George’s County has agreed to pay about $3.6 million to 10 people who were either falsely arrested or injured by police during a post-game celebration at the University of Maryland. One of the officers, James Harrison, was convicted of second degree assault and found not guilty on misconduct although the on-tape beating shows that his conduct was clearly not appropriate; Harrison could face up to 10 years in prison. Another officer Reginald Baker was acquitted of the assault and will not be held responsible for his actions.

One of the lawyers for the plaintiffs said that $2 million of the settlement will go to John McKenna, who was badly beaten by police as students celebrated a Maryland basketball win over Duke in March 2010. The lawyer says he considers the settlements a fair and reasonable payment for his clients, though he says he was disappointed by the jury’s verdict in the criminal case.

Both officers are still classified as suspended with pay.

As it is rare that victims of police brutality are given any sort of restitution, it is good that those involved with this incident have gotten something positive from the negative experience, while it certainly does not justify the assaults happening in the first place. Think for a moment – where did that $3.6 million come from? Was the suit paid out by the individual(s) who caused harm to the victims in question? Did the the officers who assaulted people work countless hours to earn the money needed to attempt to make right with the victims – or did you, your friends, and your family work countless hours only to have a portion of your salary pay off the victims of James Harrison and Reginald Baker?