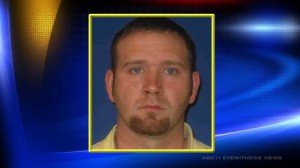 I live in Sampson County, North Carolina. So far, the sheriff’s department in this county has managed to produce 1 murderer, 1 attempted murderer, and as of today (October 25, 2012) 1 child molester. This is a small rural county. I can only imagine what’s going on in the more populated areas. I’ve been saying it was only a matter of time and I was right; my prediction came true. I encountered this deputy in December 2010 and he’s not a nice person. He’s your typical tough guy LEO who has morality all figured out and has been ordained to keep the rest of us in line. I predict something like this will happen again. Here’s the article:

CLINTON, N.C. — The Sampson County Sheriff’s Office said Thursday that one of its former deputies is accused of sexual assault.

Richard Matthew West, 30, of Clinton, is charged with statutory rape, second-degree rape, indecent liberties with a minor, and contributing to the delinquency of a minor. Bond was set at $250,000.

The assault was reported on April 23, 2011, and allegedly occurred while West was off duty.

In a news release, the sheriff’s office said he was “separated from employment” on April 25, 2011 following a preliminary investigation.

The case was then turned over to the State Bureau of Investigation to avoid any potential conflict of interest. The SBI apparently worked on the investigation for over a year.

West was originally hired by the Sampson County Sheriff’s Office in September, 2009. Prior to the sexual assault allegation he did not have any disciplinary history.