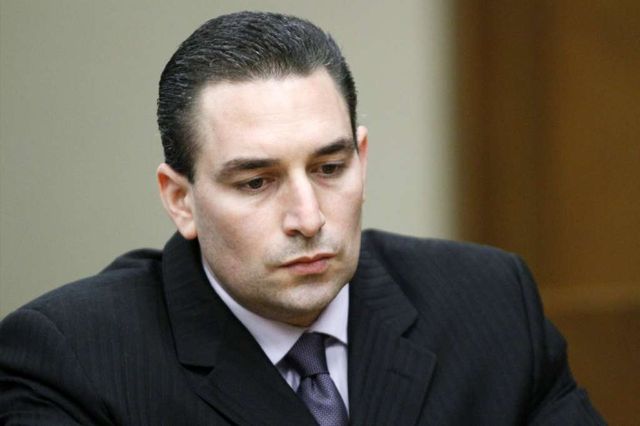 “I forgive you,” she said, choking up.

But Anthony Orban, 33, was not there. Hours before, at 2:49 a.m., Orban was found unresponsive in his cell at the Central Detention Center in San Bernardino, the San Bernardino County Sheriff’s Department said. He was declared dead at the scene.

His attorney, James Blatt, said he was informed that Orban hanged himself. The Sheriff’s Department declined to reveal details of Orban’s death, which was under investigation.

The rape victim told the court she suffered post-traumatic stress disorder for two years and lost four months of her life to shock. She criticized Orban for failing to take responsibility for his actions, alluding to his claims that he suffered a blackout allegedly induced by the antidepressant Zoloft.

FOR THE RECORD:
Zoloft rape case: An article in the Oct. 27 LATExtra section about the death of a former Westminster police detective convicted of kidnapping and rape said that California law considers an alcohol-induced blackout voluntary intoxication, “which does meet the criteria for legal insanity.” The sentence should have said that voluntary intoxication does not meet the criteria.

“While I was trying to get past my rage and shame and feelings of worthlessness, you maintained that you weren’t responsible for your actions,” she read.

Orban had testified that he had no recollection of abducting the waitress from the Ontario Mills Mall, then raping her near a Fontana self-storage lot in April 2010.

Zoloft, the Iraq War veteran said, triggered hallucinations and suicidal and homicidal fantasies in the days leading up to the attack.

Experts for both sides agreed during the trial that Orban suffered some form of blackout during the attack. But clinical psychologist Craig Rath, a witness called by the prosecution, testified that it had more to due with alcohol. On the day of the attack, Orban and a friend ordered eight margaritas and two pitchers of beer while barhopping, according to evidence presented at trial.

“He was not insane,” Rath testified during the sanity phase of the trial. “He understood the nature and quality of his acts and could distinguish between right and wrong.”

Jurors convicted Orban of kidnapping, rape and multiple counts of sexual assault. He could have faced a sentence of more than 200 years, but his sentencing was on hold while a judge looked into allegations of juror misconduct.

Superior Court Judge Shahla S. Sabet told the court Friday that she had been prepared declare no jury misconduct took place, reject a motion for a new trial and sentence Orban to 82 years to life in prison, then tack on an additional 95 years.

After court, Blatt said he and his client had no prior knowledge that Sabet was prepared to deny a motion for a new trial. Orban, Blatt said, nonetheless had a feeling it was coming and that he would spend the rest of his life in prison as a convicted sex offender and a former police officer. Blatt said he last spoke to Orban about a month ago.

“All of us knew” suicide “was a possibility,” Blatt told reporters outside court. “But when it happens it is a shock.”

Retired Salvation Army Maj. Bill Nottle said he saw Orban on Thursday afternoon. He said his demeanor was what he had come to understand as normal: “very tired” due to what his actions and trial imposed upon his family.

After the victim spoke, Blatt told her and the court that the Orban family is “truly sorry” for their relative’s actions and that they have been praying for her. Blatt added that Orban had expressed to him his “great remorse and shame for his actions.”

Outside court, Deputy Dist. Atty. Debbie Ploghaus said that Orban took the “easy way out,” and made the day in court about him, when it should have belonged to the victim, who was scheduled to read her statement.

Standing in front of a group of reporters on the second floor of the Rancho Cucamonga courthouse, the rape victim said she felt sorry for Orban’s family after hearing the news, but also that “it felt good” to express her feelings and forgive Orban.

Still, she yearned for more.

“I really wanted to tell him myself,” she said calmly. “That would have been the ultimate closure.”