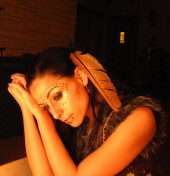 The following, originally posted at OCWeekly, was submitted by Chuck Slauson.

On the morning of October 10, Niko Black was alone and ill when deputies from the Orange County Sheriff’s Department arrived to evict her from her Garden Grovehome on Shannon Avenue. “I’m in my bed and I see them storming my property,” she tells the Weekly. “I crawl to my wheelchair.”

The 37-year-old Mescalero Apache woman, who suffers from a rare, malignant and metastatic form of cancer, refused to open the door, saying that they had no legal right to be there. On the other side was a taped copy of a court order obtained from Federal Bankruptcy Judge Theodore C. Albert in late August that she firmly believes should have prevented the OCSD from carrying out the eviction. The deputies acted anyway.

“They break down my door,” Black recounts. “I’m sitting there in my wheel chair. I’m about 100 pounds of shriveled-up cancer and a threat to no one.”

What came next, she says, was much more harrowing. “Sergeant Bob Sima puts a gun to my face, finger on the trigger, no safety and walks around me,” Black states, pausing to emotionally gather herself. “There’s no reason, except for to threaten my life, for an intimidation factor, to put a gun to my head.”

With neighbors lining up outside watching, Black’s health began to worsen. “I needed my medication, I couldn’t breathe and I was having a seizure,” she said, claiming that deputies were unresponsive to concerns about her condition; one officer even remarked that she ‘looked good’ to him. An ambulance finally arrived at her friend’s behest and she was forcibly removed from her home and hospitalized.