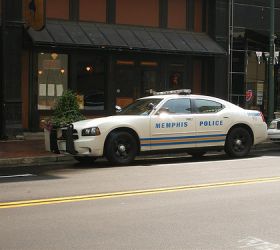 Memphis police have one of their own to investigate following two disturbing reports involving a police officer bullying and trying to intimidate civilians. Leo Veasley and Michael Montgomery have come forward to report that Officer Darrell Mallone was abusing his power as a police officer.

Veasley’s incident occurred on February 9th and was not investigated. He told WREG Memphis that he was pulled over by the officer in question for a traffic stop and ”He got very verbal. Pulled a stick out and threatened to hit me in the face.” His story continued that since he did not know the officer’s name, when he went to court a few months later he asked for Malone’s badge number and reported him to MPD’s internal affairs.

The day after Veasley filed the complaint, Officer Malone began repeatedly driving past his house, put a ticket on his car and even went as far as to shine a spotlight into the windows of his house.

According to the police department, Veasley did not file a report with internal affairs nor did he report the follow-up harassment. They said that he did file a complaint with a workstation at the precinct level but never returned their phone calls; which caused the case to be dropped. Veasley said he was never called after the complaint.

In the recent, second incident Michael Montgomery told News Channel 3, that he was driving on Germantown Parkway when he saw two people on motorcycles weaving in and out of traffic. He pulled up to them at a stop light and told them that if they did not start driving properly that he was going to call the police.

It was at this time that Mallone lifted his vest, showed Montgomery his handgun, told him that he was the police and cursed at him as he drove away. Montgomery decided to call 911 and report the incident. Later he received a call on his cellphone from the officer telling him that he would, “f**k him up” if he saw him in Memphis again.

Mallone is currently on paid leave and the deputy police director Dave Martello said that if the allegations prove true then the officer will be facing disciplinary actions.