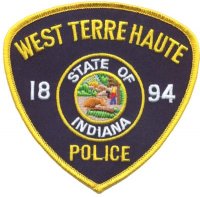 The following, originally posted at WTHITV by Brittany Earl, was submitted by Danielle Jenkins.

For more than a year the Federal Bureau of Investigations has been building a case against former West Terre Haute police Chief Mark Arnold.

Arnold used public funds to purchase the guns and allegedly he told the federal firearms dealer he was purchasing the guns for the police department.

But Arnold later admitted to the FBI the guns were resold or transferred.

Hogsett says since the investigation is on-going he can’t say how much money was taken but due to tips from outside sources, the FBI was able to build a case against Arnold.

Hogsett could not comment on whether any former West Terre Haute Police officers are being investigated but he did suggest if anyone has bought a gun from Arnold, they should contact the United States Attorney’s Public Corruption Hotline at (317) 229-2443.

Arnold faces a maximum of 10-years in prison; his sentencing will take place sometime after the first of the year.