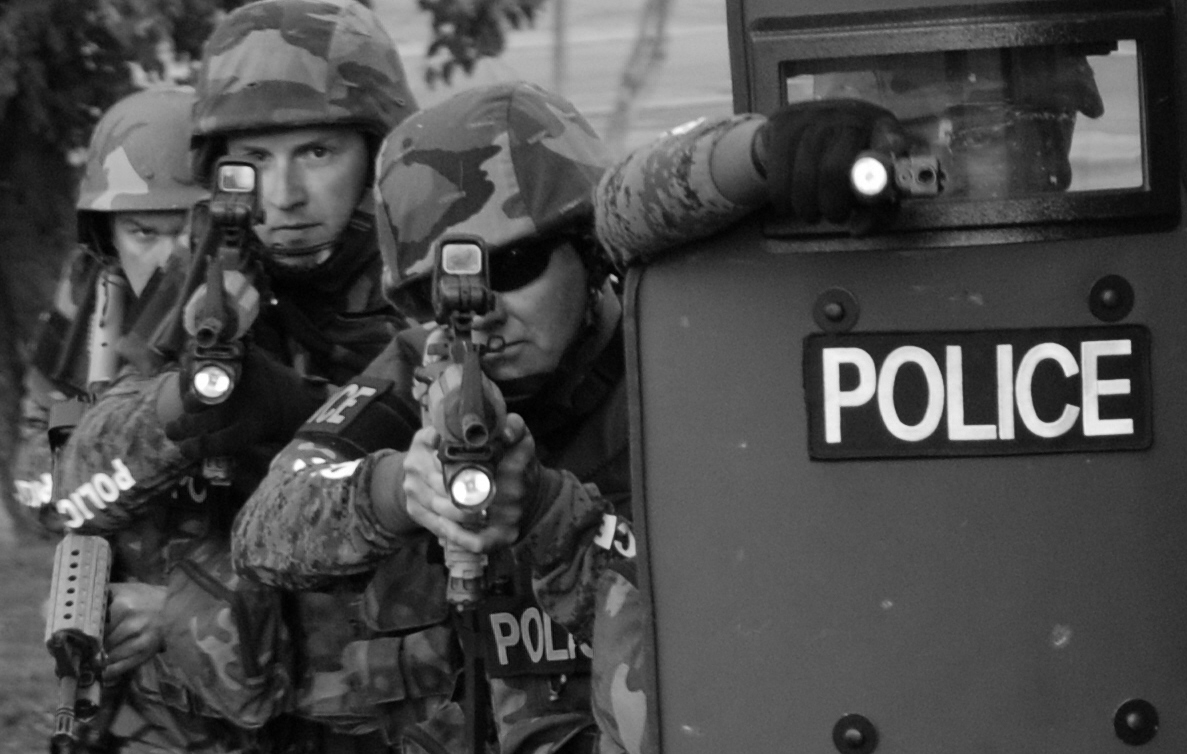 Over the past few decades, police in the United States have become increasingly militarized. It’s becoming more and more common to see police carrying military-grade weapons and wearing combat armor. Police departments across the county — even those in small towns — are forming paramilitary police units, typically known as SWAT (Special Weapons and Tactics) or SRT (Special Response Team). According to a recent USA Today interview with Peter Kraska, a criminologist whose work focuses on police militarization, SWAT teams were deployed only about 2,000 to 3,000 times per year in the early to mid 80’s. That number has shot up to about 70,000 and 80,000 per year in the present. The main reason for this dramatic increase is the use of SWAT teams for serving routine search or arrest warrants especially for drug suspects. SWAT teams have even been used to investigate suspected underage drinking and unlicensed barber shops.

One of the most frightening aspects of police militarization is the use of so-called “no-knock” searches by SWAT teams. The purpose of a no-knock search is to surprise the occupants of a building and subdue them with an overwhelming show of force before they have an opportunity to react. Police converge on a building — usually in the middle of the night — then smash the door in with a battering ram or explosives. They either announce their presence only a few seconds before breaking the door down or do not announce it at all (hence the “no-knock” title). After breaking in the door, police will sometimes throw deadly explosive devices called flashbang grenades into the home with the ostensible purpose of confusing and disorienting the occupants. They then storm the building and force everyone to the ground at gunpoint, handcuff them, and search the premises.

When police seek to obtain a no-knock warrant, they typically try to justify it in one or two ways. They either argue that they need the element of surprise in order to (1) stop a violence-prone subject before he or she has a chance to violently resist or (2) to stop a subject before he or she has a chance to destroy important evidence (e.g., flushing drugs down the toilet). It’s extremely common for judges to sign off on no-knock warrants for simply because police claim that a confidential informant — who may not even exist, for all the judge knows — claimed that someone was selling drugs. (See Radley Balko’s book Overkill for more on the legal issues surrounding no-knock raids.)

One of the biggest problems with no-knock searches is that people targeted by them often do not realize they are being raided by the police and use firearms or other weapons to defend themselves against the police. This point was made succinctly by Radley Balko in his book Overkill:

[P]olice typically serve these warrants just before dawn, or in the hours just before sunrise. They enter the residence unannounced or with very little notice. The subjects of these raids, then, are woken from deep sleep, and their waking thoughts are confronted with the prospect that their homes are being invaded. Their first reaction is almost certainly alarm, fear, and a feeling of peril. Disorienting devices like flashbang grenades only compound the confusion.

It isn’t difficult to see why a gun owner’s first instinct upon waking to a raid would be to disregard whatever the intruders may be screaming at him and reach for a weapon to defend himself. This is particularly true of someone with a history of violence or engaged in a criminal enterprise like drug dealing. But it’s also true of a law-abiding homeowner who legally owns guns for the purpose of defending his home and family.

You can see numerous cases on the Cato Institute’s interactive “Botched Paramilitary Police Raids” map where homeowners have killed police who they thought were robbers and other cases where police have killed confused homeowners.

Just recently, we were able to see video of a no-knock drug raid during which police shot and killed a confused homeowner. The police gathered at the front door of Todd Blair, a suspected meth dealer, in the middle of the night, shouted “Police! Search warrant!” a few times then, approximately two seconds after the first announcement, smashed the door in. The first officer to enter the home, Sgt. Troy Burnett, spotted Blair standing on the opposite side of the room holding a golf club and immediately opened fire on him without warning. He hit Blair three times, killing him instantly.

Despite numerous cases of police being shot by confused homeowners or confused homeowners being shot by police during no-knock raids, many SWAT supporters are in complete denial about the phenomenon. For instance, Alicia Hilton and Robert O’Brien of POLICE magazine argue that the shooting of Todd Blair was “objectively reasonable” on the grounds that Blair just had to have known the strangers breaking into his home in the middle of the night were police officers.

Examining the totality of the facts and circumstances in the Blair case, it was objectively reasonable for Sgt. Troy Burnett to shoot and kill Blair. Officers who participated in the search were wearing uniforms labeled police. They announced their presence by yelling, “Police search warrant” twice before they entered the home.

Instead of surrendering to the men he must have realized were officers, Blair lurked in a hallway, brandishing a golf club. The officers passed through the living room and were about to enter the hallway when Sgt. Burnett, the lead officer, saw Blair. An officer in Burnett’s position reasonably could have concluded that Blair posed an immediate threat because Blair was close enough to strike Burnett with the club.

Furthermore, Blair was an alleged meth user and allegedly had been involved in domestic violence. Experienced officers understand that people under the influence of drugs are more likely to commit an assault. The level of force used by Burnett was objectively reasonable.

The pieces of evidence Hilton and O’Brien use to “prove” that Blair knew he was being raided by the police are, on their face, completely and utterly ridiculous. The police were wearing uniforms labeled “POLICE,” but so what? Blair was shot immediately after the police entered his home, so he never even had a chance to read their uniforms. Was Blair supposed to have used his x–ray vision to read the uniforms while the police were on the opposite side of his front door? The police announced their presence before entering as Hilton and O’Brien say, but only two seconds before they smashed Blair’s door in. How do Hilton and O’Brien even know that Blair was able to hear the officers? How do they know he was able to decipher what they were yelling at him? Even if he had heard the police and understood what they were yelling, how was he supposed to know they were actually police officers? It certainly wouldn’t have been the first time someone posed as a police officer in order to get away with a crime.

But the problem with Hilton and O’Brien’s argument runs deeper than their poor supporting evidence. Their argument is faulty on a more fundamental level and for a reason that I think is really worth emphasizing because it goes to show just how far out of touch with reality the supporters of police militarization are. On the one hand, they want us to believe that these raids are necessary because they allow officers to surprise and confuse criminal suspects and leave them with the least possible amount of time to react. On the other hand, whenever someone is surprised or confused by one of these raids and ends up getting shot for picking up a weapon or making a “furtive movement,” they want us to believe that the shooting victim had to have known that the invaders were police and should have peacefully submitted to them with a rehearsed perfection. They can’t have it both ways.

Either no-knock raids are not planned with the goal of surprising and confusing people in mind, in which case it’s not clear what the point of them is, or they are conducted for the purpose of surprising and confusing people, in which case one cannot rationally fault someone for being surprised or confused by one. If no-knock SWAT raids are conducted to surprise and confuse residents — and, as has already been established, they are — then I think it’s “objectively reasonable” to conclude that shooting a homeowner for being surprised and confused during a no-knock raid is an act of cold-blooded murder.

For more about the Todd Blair shooting, check out this older post I wrote about it.