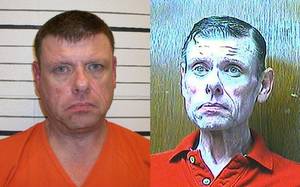 The following articles were submitted by Joe.

As reported by NEWSOK:

Sapulpa, OK – Former Valley Brook police chief Melvin Fisher, who appears to have undergone major physical deterioration since his September 2011 arrest, pleaded guilty to drug charges in Creek County, but was not given any prison time, court records show.

Photos taken by the Corrections Department show Fisher has become extremely gaunt since he was arrested a little more than a year ago. He was released on bail following his arrest and has been free.

Fisher, 49, was handed a 10-year suspended sentence Oct. 22 and will have to report to a probation officer. He also will have to register with the Oklahoma Bureau of Narcotics and Dangerous Drugs Control because he was caught with 20 grams of methamphetamine.

Court documents show that Fisher — who was charged with multiple counts of possession of a controlled substance with intent to distribute — had all but one count against him dismissed.

Fisher’s mother blames his change in appearance on an unspecified illness.

“Yes, he is sick,” Maxine Fisher said Thursday afternoon. “But that’s all I’m going to say about it.”

Maxine Fisher is an administrator for the town of Valley Brook. Melvin Fisher also did not return calls seeking comment.

Fisher and another man were arrested on Labor Day last year after a state trooper pulled over the former police chief on suspicion of drunken driving.

Court records show that troopers searching the 2000 Cadillac Escalade Fisher was driving found 20 grams of methamphetamine, an ounce of marijuana, a “large” crack rock, digital scales, four Ecstasy tablets, and numerous pills that have yet to be identified by authorities.

A trooper searching Fisher — who had been Valley Brook’s police chief for more than 20 years before his arrest — also found a butane torch lighter in the former lawman’s pockets and more than $600 in cash, court records show. He was suspended after his arrest and later fired. James City County, VA – A Newport News police officer is arrested for crashing into another car and refusing to take a breathalyzer test.

The victim was a 46-year-old man who was taken to Sentara General in Williamsburg and treated for minor injuries.

Nichol refused to take a breathalyzer test. He was charged with DUI, refusal to submit, and following too closely.

No one was at the detective’s home Monday but there was a jeep in the driveway with a shattered windshield and damage to the front bumper.

Neighbors says Nichol and his wife recently moved into their neighborhood.

The 28-year-old detective has been with the Newport News Police Department for four years and is currently assigned to the Special Victims Unit.

Nichol has been placed on administrative leave without pay pending an internal investigation.