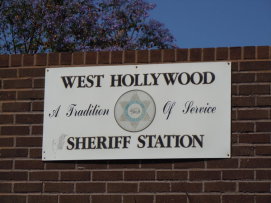 The following was reported at the West Hollywood Patch on November 14, 2012.

A deputy assigned to the Los Angeles County Sheriff’s Department’s West Hollywood Station was arrested today on suspicion of shooting and killing a Sylmar man.

Deputy Francisco Gamez, 41, is a 17-year veteran of the department and has been assigned to the West Hollywood Station since 2005. He was relieved of duty with pay on July 3 pending the outcome of the investigation, Sheriff Lee Baca said.

“The off-duty acts that led to the arrest of Francisco Gamez are deeply disturbing to me and to the entire Los Angeles County Sheriff’s Department,” Baca said. “The sheriff’s department has been fully cooperating with the Los Angeles Police Department since first learning of the investigation.”

Gamez’s pay would be suspended as of Thursday and “termination is not out of the question,” sheriff’s spokesman Steve Whitmore said.

Gamez was booked on suspicion of murder, attempted murder and use of a firearm during the commission of a felony in connection with the June 17 shooting that killed Armando Casillas.

Detectives are preparing the case for filing with the District Attorney’s Office, police said.

Officers from the Los Angeles Police Department’s Mission Community Police Station were flagged down by residents in the 14000 block of Beaver Street on June 17 and directed to Casillas, who had been wounded, police said.

Casillas was taken to Providence Holy Cross Medical Center where he was pronounced dead. A second victim was also shot at by the assailant but was not injured, according to police.

LAPD detectives began to investigate the case and learned that the suspect might be a sheriff’s deputy, police said.

The Los Angeles Times, citing police sources it did not name, reported that Gamez’s son got into an argument with someone in the neighborhood and called his father, who then allegedly drove to the area and shot the 38-year- old victim.

“I believe it was the result of some type of dispute and that dispute escalated to the point where the shooting occurred,” Los Angeles police Cmdr. Andy Smith of the Media Relations Section told reporters.

Marylou Casillas said her brother was a helpful neighbor and news of the arrest left her family feeling bittersweet.

“This is just the beginning and hopefully justice will be served for my brother,” she told CBS2.

Joseph Casillas Jr., the victim’s brother, expressed disappointment that a deputy could be involved in the slaying.

“He’s supposed to protect the community and for him to be a professional (and) do something like that, it’s not right,” he told CBS2.

Anyone with information on the case was asked to call Los Angeles police detectives Louis Zorrilla or Maria Perez at (213) 486-6890.