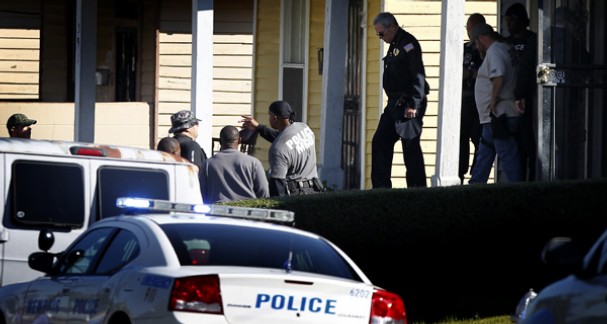 The Commercial Appeal shared the following on November 8, 2012.

Willie Bryant, a 32-year-old member of the Organized Crime Unit [at least they’re honest], was taken to the Regional Medical Center at Memphis in stable condition, but was later downgraded to critical. He was taken into surgery Thursday afternoon, Memphis Police Department Director Toney Armstrong said.

The incident began about 12:45 p.m. at 589 Arrington near Thomas in North Memphis. A multi-jurisdictional gang unit task force was serving a warrant at that location.

When police entered the home, two dogs — a pit bull and a Cane Corso — were inside, according to James Rogers administrator Memphis Animal Services. The Corso was loose and the pit bull was in a kennel.

According to police, the loose dog charged, leading the officer to fire his weapon. The shot missed the dog and hit Bryant — who was wearing a protective vest — in the back.

Bryant, who has been on the force for nine years, was rushed by ambulance to The Med, accompanied by a police escort. Officers blocked off city streets for the ambulance, then swarmed The Med in a show of support.

Police cordoned off the area surrounding Arrington at Danny Thomas, where more than two dozen MPD units responded. Officers directed motorists around the scene as a cluster of investigators gathered outside the house in an empty lot. Across the street on Thomas, groups of neighbors and other bystanders watched as MPD personnel and news crews surveyed the area.

Animal control found two more Cane Corsos in the backyard, as well as a dozen fish inside the house. Memphis Animal Services took all four dogs.

Police released no other details about the incident, including the name, age or length of service of the officer who shot Bryant. They also did not say whether there were any people in the home, but no one else was injured.

Oops! Note that after shooting the other officer, it was apparently no longer necessary to shoot the dog. -Kate