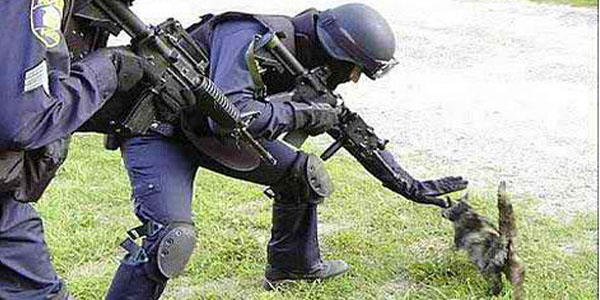 All too often we see police killing innocent pets and animals. In the last year writers at Cop Block wrote about a cop that shot a boy’s kitten, a SWAT team that shot a dog in a cage, a federal agent that shot a dog in a dog park, a foot patrol cop who shot a dog in its own front yard,  a Colorado cop who shot a dog in a fenced yard,(links) a California cop who shot the family’s 8 year old dog during a search warrant that turned up nothing, another federal officer that shot the beloved family dog while serving an eviction notice, cops responding to a false alarm that murdered the family pet as they responded and one officer who said “Its just a dog. You can buy another one” while detaining a motorist who was trying to drive his choking, dieing dog to an emergency clinic.

Unfortunately, cops proclivity for killing animals doesn’t end with dogs and cats.  Last May, an Oakland police officer shot a young deer 5 times in the head after the deer cornered itself in someone’s back yard.  The amateur videographer that caught the incident on video said that the deer was not injured, just scared and those that lived in the neighborhood was upset by the killing of “Bambi.”  The police defended their actions by stating that the deer was acting “disoriented in an urban environment” as if it would be abnormal for a wild animal to be disoriented if they had made their way into the city.  Once again, violence is the police’s answer when other methods are possible.

Even baby squirrels aren’t safe from the thugs in blue.  Sgt. Wes Talley of the Mesquite Police Department pepper sprayed a baby squirrel outside of a middle school while shocked children looked on.  Fortunately, the Mesquite Animal Control was able to clean the pepper spray off of the young squirrel and return it to the wild.

When cops are not killing pets or wildlife, their disregard for animals is still apparent. While a Natural Resources police officer stood on the sidelines, two real heroes jumped into their inflatable boat and paddled out to save a deer that had fallen through the ice and was in danger of drowning.  They managed to save the deer.  Of course you cannot make the police look bad or incompetent, so once the deer was saved by these two courageous men the police officer did the unthinkable and wrote the two men tickets for being on a vessel and not wearing life jackets.

As you can see in this video of a NC police beating his K9 partner, some officers do not demonstrate any type of decency even towards their own dogs, so we should not be surprised when it’s not just the cops themselves that are running amok, causing heart beak and chaos, but also their K-9 partners.  A Fort Wayne officer let his dog loose to chase a suspect, but the dog had no interest in going after the man fleeing instead focusing it’s attention to a two year old boy. The boy was bitten and attacked by this highly trained police dog until his handler was able to call him off.

Let’s take a look at the three most recent cowardly actions of law enforcement.

Bollinger County, Missouri Sheriff’s Deputy Kelly Barks was in such fear for her life after a family dog growled at her that she shot it, after the dog ran back into it’s kennel she shot it a couple more times until it died. You might expect that the dog was a vicious breed or at least large enough to cause injury, but no, the dog that Deputy Barks felt so threaten by that she had to use fatal force was a Chihuahua. The officer resigned shortly after this incident.  Experience tells us that charges of animal cruelty are unlikely.

An unnamed Philadelphia officer shot and killed a families’ dog when he attempted to serve a search warrant at the wrong house.  The other officers present managed to raid the correct house, but this dog murdering rocket scientist somehow ended up in house next door.  Of course, the dog protected its territory as one would expect.  He charged and attacked the intruder, paying with his life for protecting his home.

And last, a couple of teens who were playing with toy air-soft pistols that shoot the little plastic pellets in their own back yard. After about half an hour five officers armed with assault rifles raided the house and handcuffed these dangerous terrorists. While these young men were being dragged out of their home one of them pleaded with the officers to let him put his dog on a leash.  With good reason, he was worried that the officers would shoot his dog. The officers refused to let the young man secure his dog.  Instead, once the men were lying on the front lawn, a couple of these obviously sadistic cops went back into the house and executed his beloved best friend. AS if murdering the young man’s dog was not bad enough, a couple minutes after the shots rang out, one of the officers came walking out with a black garbage bag only to have it break and have the dead dog fall to the ground right in front of the owner.

One can only hope that one day all of this unnecessary killing of our pets will come to an end. For the time being this is the world we live in. If you know of a pet or animal that was tortured or injured by law enforcement feel free to contact me with your story.