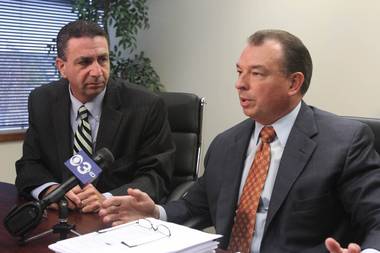 Officer Joseph DiBuonaventura — who was officially served with 13 criminal charges, finger-printed and processed at the Gloucester County Prosecutor’s Office on Nov. 9 — is facing charges of committing official misconduct, submitting a false report to law enforcement, harassment, tampering with public records and more.

Leonard said that a Loudermill hearing, which is part of the due process for any government employee facing severe discipline, was held to determine the conditions of DiBuonaventura’s suspension, but they are subject to change in the near future.

“At some point the decision will be made to see if he stays on [the force,]” Leonard said, adding that DiBuonaventura was required to turn in his badge, all police equipment and is not to identify himself as a law enforcement officer.

Moriarty filed the criminal charges against DiBuonaventura last month, claiming that the officer “hunted him down” and falsely arrested him for driving under the influence.

“Assemblyman Moriarty is pleased another step in the process has been taken, and looks forward for this matter coming to court,” said his attorney John Eastlack.

He and Moriarty held a press conference at his Cherry Hill office in October to screen a copy of DiBuonaventura’s dashboard camera recording of the arrest, and the pursuit leading up to it.

Moriarty and Eastlack said that the video clearly showed DiBuonaventura lied on his official police report about the arrest.

In the police report, DiBuonaventura wrote that he was patrolling on Route 42 northbound when Moriarty’s blue Nissan Murano cut him off when changing from the left to right lane before entering the Greentree Road jug handle. He said he smelled alcohol on Moriarty’s breath when he pulled him over, and then administered a field sobriety test before placing Moriarty under arrest for DWI. After being taken to the police station, Moriarty refused a breath test.

The dashboard camera video, however, shows that DiBuonaventura was parked on a grassy median on Route 42 facing south, and immediately pulled out when he saw Moriarty’s car — which has special legislative license plates— pass by. The video indicated the officer reached speeds of 80 miles per hour, going through a red light, to reach Moriarty. According to Eastlack, his lights and sirens were not yet activated.

The video also shows that Moriarty drove in the right lane the entire time, two cars ahead of DiBuonaventura. The officer caught up Moriarty in the jug handle, and pulled him over into the Chick-Fil-A parking lot.

While DiBuonaventura wrote in the report, dated July 31, that Moriarty cut him off on Route 42, in the video he tells Moriarty he cut him off “coming out of the jug handle.”

Moriarty has maintained he didn’t have a single drink that day, and noted he knew the officer was fired by the department for previously lying in an official internal affairs investigation. He said he was later reinstated by a court order.

“I knew he was lying about smelling alcohol on my breath because I hadn’t had anything to drink so I figured, ‘What am I getting myself into here?’” Moriarty said during the press conference.

“The law assumes the officer is operating legally and appropriately within the law and in this case I knew he wasn’t,” Moriarty said after the video was shown. “I was hunted down by this police officer who lied in the police report, lied in the summons he gave to me, lied to me, lied on tape and lied to his supervisors. I didn’t do anything wrong that day. I did nothing to be pulled over, I hadn’t had any alcohol and this officer lied.”

Gloucester Country Prosecutor’s Office Spokesman Bernie Weisenfeld said that no hearings have been scheduled yet for DiBuonaventura’s charges.