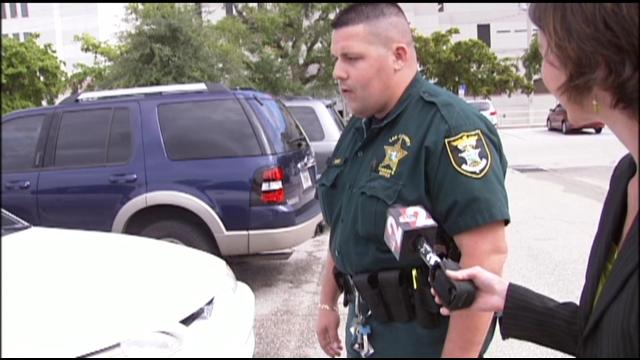 Fort Myers – A Lee County Sheriff’s deputy was fired Monday after an internal investigation revealed he had stolen merchandise from a Publix store while in uniform in July.

On July 17th, the Publix store manager informed a detective who had come to the store seeking surveillance video for a different case, that a Loss Prevention Officer had seen an unknown deputy remove and conceal merchandise and leave the store without paying several days prior.

The detective met with the Loss Prevention Officer, who relayed what she saw and provided a copy of the surveillance video to identify the unknown deputy.

The deputy was identified as Deputy Andrew Sargis on July 19th.

On September 3rd, a criminal interview was conducted with Sargis. He stated several times that he did not recall going to the Publix store at 15880 Summerlin Road on July 15th.

He was also asked whether it was possible to accidentally select merchandise, walk around the store, and place the merchandise in his pocket and exit the store without paying for it. Sargis replied, “There shouldn’t be, no.”

Sargis agreed to take a polygraph examination, which was implemented on September 7th.

During the examination, Sargis said that he had entered the store with intentions to find a dessert and pick up a weekly ad paper for his wife.

Sargis stated that while in the store, he obtained two packages of razor blades and walked around the store with the items in his hands. While walking around, he realized he didn’t have his wallet, placed the items on a shelf and left the store.

During the polygraph, Sargis was asked three questions. The results indicated deception.

When he was confronted with the results, Sargis then told the lieutenant that he had put the merchandise in his pocket and left the store accidentally. When he got home, he realized he had taken the razors but was too embarassed to return to the store to pay for them. He also suggested that some personal issues may have contributed to his poor judgement.

Detectives later learned Sargis returned to the Publix store after the polygraph exam and paid for the stolen razors.

On October 1st, Sargis met with members of the LCSO Professional Standards Division to review the investigation.

During the review, Sargis said he lied about stealing the razors because “I was scared on being labeled a thief.”

His termination from the Lee County Sheriff’s Office went into effect on Monday.