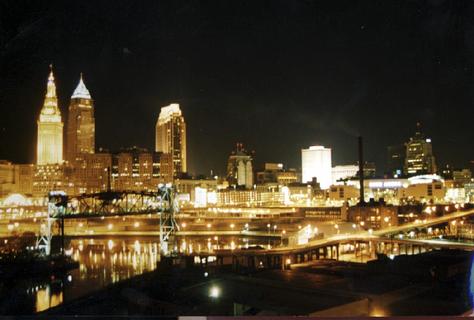 Two men shot into the air from their vehicle when outside the headquarters of Cleveland’s largest gang – The CPD*. (With 1,600+ known members and roots in the northeast Ohio city that go back to the late 1860s.)

After the pursued vehicle “violently rammed” one of the CPD’s customized rides, gang members opened fire.

Within seconds the two inside were killed. Gang members had shot 137-rounds.

The gang’s spokesperson told media that the gang members involved are “experienced and professional”, as if warning others: Don’t mess with The CPD.

What would you do in such a situation?

Your car backfires (or someone nearby gets into their car and slams their door, or any number of other scenarios), you’re driving down the street, and all of a sudden your entire rear view mirror and your side mirrors display an armada of vehicles bearing the insignia of the CPD, a violent gang. A gang so blatantly entrenched that it demands protection money from everyone in the surrounding 82-square-miles.

Would you try to defend yourself? Maybe swerve a little bit to try to get the gangsters to back off? I mean, what had you done? Drive by their hangout?

In case it’s not clear, the gang referenced – the CPD – is the Cleveland Police Department.

And one other fact that needs correcting – the pair driving by the police department didn’t fire into the air. How could they? No firearm was found in their vehicle.

What was found in the shot-up car were the bodies of two dead individuals. Turns out it wasn’t two men as one CPD employee thought but a man and a women. But what difference does it make to a bullet, right?

The real question here is – did those two people – Timothy Russell, 43, and Malissa Williams, 30 – deserve to die? If not then the shooters should be held accountable.

Sure, Russell and Williams kept driving when some of us would have stopped. But does that mean they should be executed in a hail of bullets? They had done nothing wrong!

And why might others have stopped? Because they’ve been conditioned to believe that some people – those with badges – have extra rights and thus must be obeyed.

At the crux of this incident – and all other horrific incidents like – is the lack of accountability that will always exist when policing is “provided” by a monopoly, which at its core is founded on the initiation of force – the “right” to steal your wealth to “protect” you.

It’s doublespeak at its finest.

The shooters have thus far gone unnamed and unquestioned. Meanwhile, their handlers peddle misinformation – that they ” did a great job.”

If you were sitting at your office and thought you saw someone shoot into the air, and you decided to pursue with a posse of your friends, ultimately shooting at them not just a dozen times, but almost a dozen, dozen times, and killing them, would that be a “great job”?

Yet such an action occurs because the shooters don’t believe there are real ramifications for errors. Even errors that take the lives of two who’d harmed no one.

Most of us have similar ends – the desire to live in a peaceful, prosperous community. Where we’re each free to pursue our happiness while respecting others doing the same. The question is what are the best means?

Might it be when all goods and services, including policing, are provided via consensual interactions?

You own yourself. Educate yourself.

Let’s together create a better world free of an institution based on violence.

More related lamestream media coverage of the incident in Cleveland:

*Search for “gang” and Google tells you it’s, “An organized group of criminals.” The definition of “criminals” is, “A person who has committed a crime.” The definition of “crime” is, “An action or omission that constitutes an offense that may be prosecuted by the state and is punishable by law.” But is it really “law” when it’s created and interpreted by men and women who subsist on theft? Might that be more-accurately framed as legislation? What will you do if you have to act based on law – on what you at your core know is right, and legislation – what some stranger decrees to be reality?

Find this post thought-provoking? Watch the video below and continue down the rabbit hole.