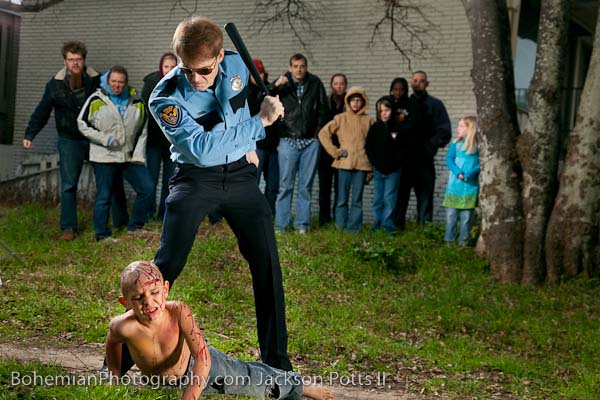 I can think of only two reasons that a police officer would feel it was necessary to use violence against a child.  Either they are bullies who enjoy preying on those that are weaker than them, or they are incompetent cowards.  I am not sure which of these reasons were at play when a Lakewood Colorado police officer pepper sprayed an eight year old boy, but neither should be acceptable to the public.

The police were called (instead of his mother) when eight year old Aidan Elliot began a violent temper tantrum in his Lakewood elementary school.  Aidan had knocked over some chairs and a T.V. cart before pulling a piece of wooden trim from the wall and threatening his teachers with it.  When the police arrived they ordered him to put the trim down and then pepper sprayed him in the face, not once, but twice.  There were no other children in the classroom and the teachers had already secured themselves in an adjourning office, but this grown police officer who supporters will no doubt tell you is so brave that he “puts his life on the line” every day, felt so threatened by this 82 lb child that he could not “disarm” him without spraying an irritating chemical into his eyes and face.

As if the story itself is not nauseating enough, Aidan’s statement on the Today show, that he “kind of deserved it”, literally makes me want to throw up.  What if it was his mother who had pepper sprayed him instead of a bully in blue?  Would people still be as supportive?  Would they still nod in agreement when an eight year old victim of abuse said he “deserved it”, or would they be outraged by a mother’s use of pepper spray on a young child?  Would a police spokesman call the mother’s use of pepper spray on a child a “great choice” or does he reserve that kind of praise only for abuse perpetrated by uniformed thugs?

Unfortunately, Aidan is not the first child to be abused at the hand of the police.  Bloomington, Illinois police officer, Scott Oglesby, choked a seven year old boy who was having a seizure while at school. The young boy’s seizures cause him to scream and act like a child having a temper tantrum.  Oglesby who was at the school after being called for an unrelated incident, “darted” into the room, told the boy that he was giving him a headache and then lifted him off the floor by his throat.  He then carried the boy to the Principle’s office and threw him into a chair.  After Oglesby returned to the classroom where the assault occurred, he asked the staff “You got any more?”  Not surprising, the State’s Attorney decided not to press any charges against Oglesby and at this time he remains employed as a police officer.

Children are not the only young victims of the police.  Teenagers are also being abused by police officers.  Clifford Griffing has filed suit against McKinney, Texas police officers for breaking his arm while he was a student at McKinney Boyd High School.  Griffing was attempting to leave school because he was ill.

Shortly after lunch time, Griffing felt that he could not physically attend the rest of his classes for the day.

He left the nurses office and was walking toward an exit door when he states an officer yelled “You got to get back in the school!”

After asking several questions, the officer wrote Griffing a truancy ticket. When he received the ticket, he turned and continued to walk through the exit doors.

According to the lawsuit, the officer yelled at Griffing and grabbed one of his arms and Officer McGrew grabbed the other. The suit states the officers twisted his arms and pushed him to the ground.

Griffing alleges he fell on his left arm and yelled to the officers that his arm was broken. The officers allegedly ignored Griffing and twisted his arms behind his back, causing a compound fracture with the bone protruding through the skin.

The high school student underwent surgery and physical therapy for the injury.

The embedding of police officers in all government schools is just another symptom of the police state.  What better way to desensitize the masses to the polices’ bad behavior than have them routinely yield to the demands of an armed agent of the government on a daily basis.  What does it say about government schools that they are so desperate to keep students from leaving that a “resource officers” reaction to someone who dares to walk out the door is violence?

As we have seen and read over and over in videos and news articles, the go-to reaction of many of today’s police officers is violence.  It seems as it is the only tool they have in their arsenal regardless of the circumstances.  Parents need to remember this when in moments of desperation they seek the help of what at some time in the past may have been a “peace officer”, but today is nothing more than an armed thug.  Unfortunately for her son, Stacey Brown learned this lesson the hard way.  Calhoun County Alabama Sheriff, Larry Amerson, was caught on surveillance camera choking Ms. Brown’s 14 year old son.  Ms. Brown had enrolled him into the county’s “scared straight” program after he got into some trouble at school.  According to the lawsuit filed by the boys mother “the sheriff assaulted and choked her handcuffed son in the county jail, after a deputy had threatened to ‘slit your throat, cut your balls off, shove them down your throat, and stomp you until you bleed.'”

All of these children and young people deserve their perpetrators to be held personally responsible for their crimes, but more importantly they deserve adults in their lives that will stop calling upon armed agents of the government to deal with their misbehavior.